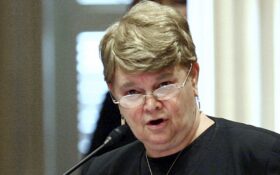 The investigation of a Democratic leader in California that stunned the political world got yet another new twist on Thursday after the Los Angeles County Sheriff’s Department and FBI raided her home last week.

County Supervisor Sheila Kuehl, a top Democratic Party official and a former California state Senator, was the subject of a search warrant at her house as well as four other locations on September 14.

It seems Kuehl was tipped off before the raid by an insider.

On Tuesday, California Attorney General Rob Bonta — head of the state Department of Justice — announced that he was assuming all responsibility for the investigation into contracts awarded to a nonprofit group run by a friend of Kuehl.

Bonta said he was taking over the investigation and asked the nation’s largest sheriff’s department to stop its probe and to hand over its evidence in the case based on these allegations that Kuehl was tipped off.

At a hearing Thursday, The Los Angeles Times reported that investigators reviewed 250 text messages and two voicemails from Kuehl’s phone related to the alleged tip-off from the night of September 13, just before the raid.

The judge in the case said on Thursday, “It’s a very serious allegation, that the supervisor had been tipped off that search was coming. That’s not nothing. It’s a potential felony.”

Kuehl called the corruption probe an act of political retaliation.

The Sheriff’s Department released a letter that Bonta sent Tuesday to Undersheriff Timothy K. Murakami that said he has authority to take over investigations “in the public interest” which ordered the department to cease activity in the case, including making public statements or court filings.

For more than a year, the Sheriff’s Department has been investigating some $800,000 in contracts awarded by the county’s Metropolitan Transportation Authority to Peace Over Violence, a nonprofit organization that describes itself as a “social service agency dedicated to the elimination of sexual and domestic violence and all forms of interpersonal violence.”

The contracts were to operate a hotline for reporting sexual harassment on public transit.

The group’s executive director and CEO is Patricia Giggans, a friend of Kuehl.

The Sheriff’s Department has said it was looking into whether Kuehl was improperly involved in obtaining contracts for the group.

Kuehl is a fierce critic of Sheriff Alex Villanueva and has called for his resignation. She appointed Giggans to serve on the Civilian Oversight Commission that monitors the Sheriff’s Department.

Both have denied wrongdoing in regard to the contracts.

Sheriff’s deputies raided county offices and the homes of Kuehl and Giggans but a Superior Court judge then ordered the Sheriff’s Department to temporarily cease searching any computers and hard drives seized in the raids.

Kuehl and Metro challenged the validity of the search warrants, with lawyers for Kuehl writing in a court filing Monday that raids at Kuehl’s home and office were “politically motivated and retaliatory.”

The filing called warrants for those searches a “flagrant abuse of power and an offense to the rule of law.”

Villanueva had recused himself from the investigation but had discussed it in interviews and on social media as he campaigns for reelection.

On the day of the raids, the sheriff asked Bonta to look into whether Kuehl and Giggans had improperly received advanced notice of the searches. In Tuesday’s letter, Bonta said he would look into the allegations but also was taking over the Sheriff’s Department probe.

“In recent days, the public unfolding of an unprecedented investigation has raised serious questions for residents of Southern California and beyond,” Bonta said in a statement released by his office. “I recognize the deep uncertainty this has engendered.”

He said his office was committed to “a thorough, fair, and independent investigation that will help restore confidence for the people of our state.”