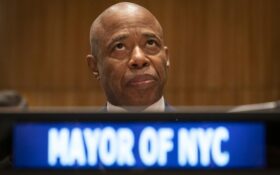 The Democratic mayors of New York and Washington, D.C. are unable to handle the influx of illegal immigrants from the U.S. Southern border.

They are asking the Biden administration to help with what they say is a surge in their cities of asylum-seeking illegals from border states, eliciting gleeful reactions from Republicans who say the pleas are proof the U.S. is in an illegal immigration crisis.

Muriel Bowser of Washington and Eric Adams of New York have plunged deep into the national debate about how to deal with illegal immigrants at the U.S. border with Mexico, seizing on bus trips paid for by the states of Texas and Arizona to send just a small portion of illegal immigrants to the nation’s capital after their release by federal immigration authorities at the border.

Adams had falsely claimed illegals have also been bused to New York City, where he’s mayor. He downplayed those lies Thursday, but stood firm in his criticism of the tactic touted by Gov. Greg Abbott of Texas and Gov. Doug Ducey of Arizona, both Republicans.

“The mere fact that they sent people out of their states, people who were seeking refuge in our country, then sent them away — did they deny that?” Adams said. “They ended up here because they didn’t get the support there.”

Abbott and Ducey have trumpeted the bus trips, a months-old practice that has been long on political theater but short on practical impact. They’ve sought to put President Joe Biden on notice about the consequences of weak border enforcement.

About 5,200 illegal immigrants have been bused from Texas since April and more than 1,100 from Arizona since May — a small percentage of the hundreds of thousands that have flooded Texas and Arizona. The Republican governors call the practice a voluntary free ride that gets migrants closer to family or support networks.

It has left the Democratic mayor furious. Bowser said the asylum-seekers are being “tricked,” as many don’t get close enough to their final destinations and some are left at Union Station near the U.S. Capitol and the White House.

“This is a very significant issue,” she said Sunday on CBS’ “Face the Nation.”

Under pressure to provide financial support, Bowser says she wants the federal government to help. The City Council told the mayor last week that volunteer groups are “burned out and overwhelmed.”

“Now that the border has come to D.C., it is our responsibility to meet the moment,” the council members wrote, while also castigating Abbott and Ducey for showing “no regard for people who are exercising their human right to seek asylum.”

Republicans who have been sharply critical of the White House have barely contained their glee.

Looks like Mayor Bowser is starting to feel a glimpse of what it's like to be a border community under the #BidenBorderCrisis.

Doesn't feel great, does it? https://t.co/FU3liWjHHy

If the Mayors of NYC & DC are overwhelmed by the #BidenBorderCrisis, imagine how communities along the border feel…

Ducey seized on Adams’ incorrect statement that Arizona was busing migrants to New York, noting it was sending them only to Washington.

“Mayor Adams needs to get his facts straight and pay closer attention to what’s really occurring because our nation’s security depends on it,” he wrote on Twitter.

On Thursday, Adams placed further emphasis on the scale of New York’s illegal immigrant influx and the city’s legal and moral obligation to provide shelter, while condemning Texas and Arizona.

“We do need help from the federal government, through FEMA, to assist us. This city was already dealing with a shelter population, and we’re going to need help to deal with this unprecedented surge,” Adams said.

White House press secretary Karine Jean-Pierre said earlier this week that the administration was looking into the mayors’ concerns. She said it was “shameful that some governors are using migrants as a political tool, as a political play.”

In Texas, Abbott has cast himself as a counterweight to Biden on immigration, insisting that “every American community is a border community.”

Abbott’s busing is just one element of an increasingly aggressive expansion of his immigration enforcement powers into the traditional domain of U.S. government. Abbott authorized state forces this month to apprehend migrants and return them to the U.S.-Mexico border, where Texas has spent more than $3 billion in state funds on a massive security apparatus, without stemming the flow of migrants.

Arizona said it has bused 1,151 migrants to Washington since May. About one of every four of them named New York as their destination, about one in five said New Jersey, and many of the rest were headed to Georgia or planned on staying in Washington, Ducey spokesperson C.J. Karamargin said.

The Border Patrol stopped illegal immigrants nearly 193,000 times in June alone. Even more staggering was that it represented a decline in illegal border crossings after four straight monthly increases. Those numbers, hovering near the highest levels in two decades, show how little the bus rides represent the massive overall migration flows.

The U.S. has been the world’s top destination for asylum-seekers since 2017, according to the United Nations’ human rights agency, a daunting challenge that has dogged Biden and his immediate predecessors, Donald Trump and Barack Obama.

A pandemic-related rule denies a chance at asylum to many on grounds of preventing the spread of COVID-19, but Title 42, as it is known, has been applied unevenly. Tens of thousands of people are released into the United States every single month on parole or with notices to appear in immigration court. Only approximately ten percent are ever seen again.

Adams said New York has experienced a “sharp increase” in asylum-seekers — he estimated about 2,800 people in recent weeks, but acknowledged that the city has no specific data on migration status because they don’t ask.

He has called for a probe into whether other states are directing asylum seekers to New York.