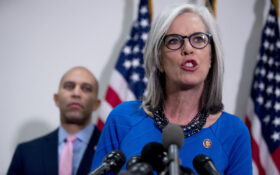 Clark, 59, ranks second-highest among the House Democrats, behind only New York Rep. Hakeem Jeffries. At one point, Clark was even seen as a possible successor to former House Speaker Nancy Pelosi.

In court Monday, a prosecutor read the formal charges against Dowell… and they aren’t pretty.

Dowell, 23, flailed her arms and struck a police officer trying to arrest her for defacing a bandstand in Boston with anti-police slogans over the weekend, a prosecutor said at her arraignment Monday.

A resident of Melrose, Dowell was arraigned in Boston Municipal Court on charges of assault and battery on a police officer, vandalizing property, tagging property, vandalizing a historic monument, and resisting arrest. Police also found a spray paint can in her backpack and saw paint on her hands and jacket, prosecutors said.

Not guilty pleas were entered on Dowell’s behalf and she was released on the $500 bail she posted after her arrest Saturday.

Neither Dowell nor her attorney commented outside of court.

“I love Riley, and this is a very difficult time in the cycle of joy and pain in parenting,” Clark tweeted over the weekend in regard to Dowell’s arrest. “This will be evaluated by the legal system, and I am confident in that process.”

Dowell is due back in court on April 19.

Officers responded Saturday night to a report of a protest at the Parkman Bandstand, a monument at a public park.

At the park, the officers saw a person — later identified as Dowell — spray-painting the monument with the words “NO COP CITY” and “ACAB,” the police department said in a statement posted on the department’s website.

The acronym “ACAB” stands for a vulgar anti-police phrase.

“A group of about 20 protesters began to surround officers while screaming profanities though megaphones on the public street causing traffic to come to a standstill,” police said, according to the Associated Press. “An officer was hit in the face and could be seen bleeding from the nose and mouth.”

Women make up only 14 percent of violent offenders, according to Justice Department’s old data from self-reported victims. However, Dowell is transgender, and she is biologically male.

Clark, 59, is in her sixth term in the House and represents the state’s 5th Congressional District, encompassing some suburbs of Boston. She serves as the House Democratic Whip.

“Last night, my daughter was arrested in Boston,” Clark tweeted. “I love Riley, and this is a very difficult time in the cycle of joy and pain in parenting. This will be evaluated by the legal system, and I am confident in that process.”

Some conservatives slammed Clark for flip-flopping in his opinions of the criminal courts.

In June 2020, Clark tweeted, “Systemic racism exists in our schools, in our health care system, in our justice system.” She stopped short of calling to defund the police, but he hardly expressed “confidence.”

The Horn editorial team contributed to this article.