Top Dem to drop out after 'hot mic' caught this!? - The Horn News 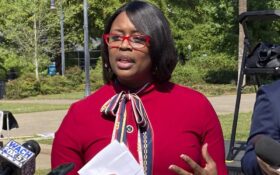 An upstart Democrat is vying to unseat Republican U.S. Sen. Tim Scott, a senator with apparent aspirations for the presidency. If successful, the Democrat — state Rep. Krystle Matthews — might nix Scott’s potential as a presidential candidate.

However, Matthews has suffered one setback after another on the campaign trail, and now she’s facing calls to step aside after an embarrassing “hot mic” moment.

Matthews is facing calls from within her own party to fold her campaign following the publication of additional leaked audio in which she appears to make racist remarks about her constituents.

The calls for state Matthews to withdraw just two months ahead of the general election came Thursday in reaction to leaked audio published by conservative activist group Project Veritas of Matthews speaking to one of its members, without her knowledge.

Sitting in a restaurant, Matthews, who is Black, is heard saying that she represents a “mostly white” district, adding, of white voters: “I keep them right here — like under my thumbs. … Otherwise, they get out of control — like kids.”

“You ought to know who you’re dealing with,” Matthews goes on to say. “You’ve got to treat them like s***t. That’s the only way they’ll respect you.”

However, Matthews confirmed that this was her own voice on the recording.

The compilation also features more of Matthews’ conversation, parts of which were previously published by Project Veritas, in which she spoke to an inmate about funding her campaign with “dope boy money” and having Democrats run as Republicans, saying “secret sleepers” represent “the only way you’re gonna change the dynamics in South Carolina.”

At the time of the earlier release, ahead of South Carolina’s June primary runoff, Matthews confirmed to The Associated Press that it was her voice on the tape but said the edited audio of a “tongue-in-cheek” exchange didn’t reflect the full picture.

Matthews won the runoff to face Scott, who is seeking what he’s said will be his final Senate term and is among South Carolina’s most popular politicians. The Black Republican is widely expected to win the general election in South Carolina, where no Democrat has won a statewide race in more than 15 years.

“If any of our white counterparts had said the same thing with regards to blacks, the minority community, including myself, would be up in arms calling for that member’s immediate resignation,” Bamberg added.

In a statement provided to AP, Cunningham said that “there is absolutely no place in our political discourse” for Matthews’ comments, adding that “the Democratic Party cannot and should not tolerate such behavior from our elected officials and candidates.”

State Sen. Brad Hutto, Democrats’ leader in that chamber — who was also his party’s nominee to challenge U.S. Sen. Lindsey Graham in 2014 — echoed Cunningham’s comments about Matthews’ Senate bid, telling AP, “When candidates of either party start making irresponsible statements, beyond what party they’re from, they need to reevaluate their candidacy, and that’s what needs to happen here.”

One of the fellow Democrats Matthews defeated, Catherine Fleming Bruce, told AP she agreed with the calls for Matthews to step aside, saying the nominee “has made it impossible for her to be that standard bearer, representing our state’s diverse population.”

Trav Robertson, chairman of the state’s Democrats, emphasized on Thursday that Matthews didn’t represent the party’s perspective but stopped short of urging her to quit her campaign, which he said was “becoming a distraction to other Democrats on the ballot.”

“If I were advising her campaign, I would focus on her getting reelected to the (state) House of Representatives,” Robertson told AP.

Were Matthews to suspend her campaign, her name would likely still remain on ballots, which party officials said were already being produced for overseas voters. With no third-party candidate in the race, Scott’s name is the only other that would appear.

“Regardless of race, I love everyone,” Matthews said in her statement. “One thing you can learn from Project Veritas’s first audio attack on me, is obviously I have no biases toward a certain ethnic group.”

Listen to the audio here —