Nancy Pelosi STABBED IN THE BACK by... who!? (she's stunned!) - The Horn News 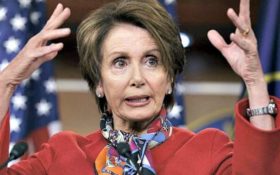 Just a little after the 100-day mark of the Democratic House overtake, liberal lawmakers are turning on each other — and the rift between a freshman legislators and House Speaker Nancy Pelosi, D-Calif., has exploded into a full scale civil war.

Rep. Rashida Tlaib, D-Mich., accused Pelosi and other ranking Democrats of using African-American voters — and she’s sick of it. She took to Twitter to complain that a significant portion of black House Democrats are “paraded” around on stage by Pelosi and her elitist friends, but given no voice.

“They put us in photos when they want to show our party is diverse,” Tlaib wrote. “However, when we ask to be at the table, or speak up about issues that impact who we are, what we fight for & why we ran in the first place, we are ignored. To truly honor our diversity is to never silence us.”

Tlaib is remembered most for nasty comments in January, proclaiming to her voters after she was sworn into office: “We’re going to impeach the mother******.”

“We’re going to go in and impeach the motherfucker” pic.twitter.com/oQJYqR78IA

Since then Tlaib has been considerably quieter than fellow congressional freshman, Reps. Alexandria Ocasio-Cortez, D-N.Y., and Ilhan Omar, D-M.N.

Both Ocasio-Cortez and Omar have been regularly taking shots at Pelosi and the establishment Democrats, demanding more extreme and far-left legislation.

Omar, herself embattled by controversy over anti-Semetic remarks and dismissal of 9/11 victims, attacked Democratic leadership on social media this week.

All this noise is serious trouble for Pelosi and the rank-and-file Democrats. And after 50 years of depending on African-American voters loyalty, they could be in big trouble.

If Pelosi doesn’t get control soon, voters are going to flee the party. Without that key demographic, it could be the end of the Democrats’ future as an entire party.

Talib’s statements mirror that of conservative activist Candace Owens, an African-American that has led a massive coalition of young minorities leaving the Democratic Party with BLEXIT movement.

The idea is a call for an African-Americans to question their loyalty to the Democrats that have repeatedly failed to deliver to their community — and it’s working.

It seems there’s no meeting in the middle on this one.

Pelosi is against the wall — and she knows it.

For Pelosi, getting the far-left radicals elected in 2018 was the easy part.

Life, it seemed, was fun then. Living with them – Pelosi is finding out – is another story.