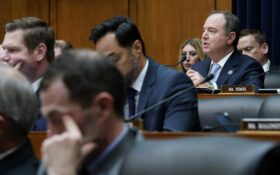 U.S. Rep. Adam Schiff, D-Calif., announced Tuesday that he has tested positive for the coronavirus.

“I’m feeling fine, and grateful to be vaccinated and boosted,” the 61-year-old Schiff tweeted. “In the coming days, I will quarantine and follow CDC guidelines. And remember, please get vaccinated!”

Schiff didn’t indicate where he might have contracted the infection or whether it involved a new COVID-19 subvariant, BA.2, that has provided worrying upticks in caseloads overseas and is spreading in the United States.

President Joe Biden, 79, received his fourth dose of the coronavirus vaccine last week, according to the Associated Press.

Former President Donald Trump, 75, said in December that he had received three doses. He has yet comment about a fourth dose.

“I got my booster shot as soon as they were available… and just the other day former President Trump announced he had gotten his booster shot,” Biden said at the White House in December.

“It may be one of the few things he and I agree on.”

This evening, I unfortunately tested positive for COVID-19.

I'm feeling fine, and grateful to be vaccinated and boosted. In the coming days, I will quarantine and follow CDC guidelines.

And remember, please get vaccinated!

Schiff has represented portions of Los Angeles County in the House since the year 2000. He has served on the Foreign Affairs Committee and the committee on federal spending.

Since 2015, Schiff has been the highest-ranking Democrat on the House Intelligence Committee. As such, he led the inquiries related to Russian interference in 2016’s presidential election.

He also participated in the hearings on Hillary Clinton’s Benghazi scandal, despite having described the hearings as “a tremendous red herring and a waste of taxpayer resources.”

At this point, both parties acknowledge some degree of Russian interreference in the election, but Schiff lent credence to a more paranoid account, voicing worries about Russian blackmail against Trump.

“At the end of the day we need to make sure that our president is operating not in his personal best interests and not because he’s worried about what the Russians might have but because what he is doing is in America’s best interest,” Schiff said on NBC’s Meet the Press in 2017.

“The fact that we have questions about this is in itself harmful.”

Trump has responded on Twitter by describing the collusion theory “the Dem loss excuse.”

The former president added, “Sleazy Adam Schiff, the totally biased Congressman looking into ‘Russia,’ spends all of his time on television.”