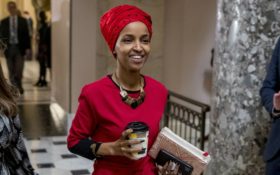 Just five months after being elected, Rep. Ilhan Omar, D-M.N. is showing what she really believes — and seems as though she has no interest in serving the United States at all.

A tweet made by Omar in 2017 resurfaced recently where she claimed that thousands of Somalis were killed during the Battle of Mogadishu (best know for it’s depection in the movie “Black Hawk Down”) as a response to the deadly Somali attack on U.S. soldiers.

19 American troops were killed and 73 were wounded.

Omar referred to the United States as “Satan” and implied that the hundreds of anti-American fighters there were victims of U.S. terror —

In his selective memory, he forgets to also mention the thousands of Somalis killed by the American forces that day! #NotTodaySatan https://t.co/wrFocrZymQ

U.S. forces were in Somalia to stop a bloody civil war taking place at the time. One would think Omar, who is Somali-American, would know that U.S. troops were invited by the United Nations trying to provide relief in Somalia.

Mike Durant, the surviving real-life pilot of the helicopter that was shot down during the battle, set the record straight for Omar.

“Losses taken on the Somali side came as a result of their attempts to ambush our ground convoy and flight of aircraft. Our forces, being vastly outnumbered, fought to save their own lives. All the Somali militia had to do was walk away, but they persisted,” Durant said.

Veteran Kyle Lamb, who served there alongside Durant, spoke to Fox News’ Tucker Carlson about Omar’s ignorance — and the humanitarian efforts on behalf of the American troops:

“It’s kind of disturbing,” Lamb said. “First of all, she wasn’t there. We were trying to take out Aidid because he was a clan leader … that had kind of taken over [Mogadishu]. They were taking the food, any of the aid that we were giving to Somalia, also weapons and they were running drugs … He needed to be eliminated.”

Critics say Omar’s response is proof that either she doesn’t know or she doesn’t care. Either one is dangerous for an elected leader.

It’s unnecessary and gross behavior that leads one to wonder why Omar is even serving in Congress, and whether her direct interests lie with the American people. Or, does she simply want to bash the U.S. for trying to help foreign countries?

Are you a United States Congresswoman? https://t.co/iNpM6swcO3

You can watch the Fox News interview with Kyle Lamb here: