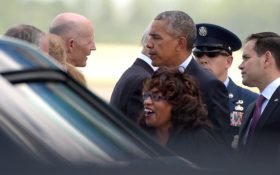 Former U.S. Rep. Corrine Brown, a Florida Democrat, joined Congress in 1993, and she remained a liberal leader there for 24 years.

Despite scandals over forging a signature, failing to report a gift, and formally objecting to both of George W. Bush’s presidential victories, Brown was one of the most powerful people in the Democratic Party.

Then she became undone by one still-ongoing scandal.

Brown, whose initial conviction in a large charity and tax fraud case was tossed out by an appeals court, will plead guilty before a second trial, according to court documents filed Tuesday.

The second trial had been set to begin Sept. 12. Brown’s original 2017 conviction was thrown out by the 11th U.S. Circuit Court of Appeals because Corrigan improperly removed a juror during deliberations who had said the “Holy Spirit” told him she was innocent.

Brown, 75, served about two years of a five-year sentence in a minimum-security prison camp, according to Jacksonville.com. She was reportedly released to “something like home confinement” in April 2020 due to fears about her advanced age making her more vulnerable to the coronavirus pandemic in prison.

Before the fraud case, Brown represented the Jacksonville area in Congress. In 1992, after a state legislative career, she became one of the first three Black people elected to Congress from Florida since Reconstruction.

Brown lost re-election in 2016 amid both the fraud scandals and a court-ordered redistricting. She was succeeded in Congress by Al Lawson, another Democrat.

Prosecutors said Brown siphoned money from the One Door for Education Foundation for personal use. They said the pattern of fraud by Brown and her top aide included using hundreds of thousands of dollars from the foundation to pay for lavish parties, trips and shopping excursions.

Federal prosecutors said Brown, her chief of staff and One Door’s executive director used the charity to bring in more than $800,000 between 2012 and 2016, through donations and events including a high-profile golf tournament at TPC Sawgrass.

The Virginia-based One Door gave out only one scholarship, for $1,200, to an unidentified person in Florida, according to court documents.

Brown’s lawyers did not immediately respond to The Associated Press‘ emails seeking comment. It remains unclear which specific charges Brown would plead guilty to.