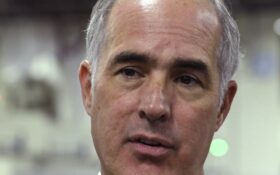 Democratic Sen. Bob Casey Jr of Pennsylvania said Thursday that he will undergo surgery in his battle against prostate cancer. Casey, 62, tweeted that he was first diagnosed last month.

“While this news came as a shock, I can report that I have an excellent prognosis, as well as the benefit of exceptional medical care and the unwavering support of my family.”

Casey expects to make a full recovery. He said he will undergo surgery in the coming months and is confident that treatment will allow him to continue working in the Senate “with minimal disruption.”

Colleagues from both parties have wished Casey a full recovery.

In the coming months I will undergo surgery, after which I am expected to make a full recovery. I am confident that my recommended course of treatment will allow me to continue my service in the 118th Congress with minimal disruption, and I look forward to the work ahead.

The senator, serving his third term, has not said whether he will run for a fourth term in 2024.

In last year’s midterm elections, the Democrats prevailed in Pennsylvania’s race for U.S. Senate, with John Fetterman succeeding the retiring Republican Pat Toomey. It was the only U.S. Senate seat to change parties.

However, these swing-state Democrats are headed for a difficult election in 2024, with a presidential election occurring on the same ticket.

The Senate Democrats are also facing a difficult election nationwide.

On the same day as Casey’s announcement, Sen. Debbie Stabenow, D-Mich., announced her decision to retire after 2024, giving Democrats another swing state to defend.

In 2024’s Senate races, some incumbent Democrats are facing re-election in Republican-leaning states, like Ohio, Montana and West Virginia.

Meanwhile, Sen. Jacky Rosen, a first-term Democrat, will face re-election in Nevada, the site of last year’s closest race for U.S. Senate… and Sen. Kyrsten Sinema, I-Ariz., recently left the Democratic Party and paved the way for a messy race next year.

At 16 years in the Senate, Casey is already the longest-serving Democratic U.S. senator in Pennsylvania history. He arrived in the Senate after unseating incumbent Republican Rick Santorum.

Casey is a key ally of labor unions and President Joe Biden. In Congress, Casey has backed all of Biden’s top priorities and forged a close relationship with the president, at least in part because they share the same hometown of Scranton. He is the son of the late Pennsylvania Gov. Bob Casey Sr.