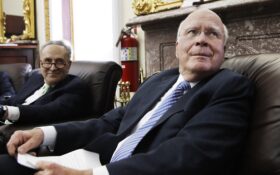 U.S. Sen. Patrick Leahy of Vermont was hospitalized late Thursday after he felt unwell at his McLean, Virginia, home, his office said.

As a precaution Leahy, 82, was rushed to a Washington-area hospital for tests. At the recommendation of his doctors, he was expected to remain in the hospital overnight for observation.

Leahy will retire in January, at the end of his term. This year, he’s the only Senate Democrat not seeking re-election.

“While I will continue to serve Vermont, Marcelle and I have reached a conclusion: it is time to put down the gavel,” Leahy announced at the time, referring to his wife.

“It is time to pass the torch to the next Vermonter, who’ll carry on this work for our great state. It’s time to come home.”

In June, Leahy fell and broke his hip. At the time his staff said he was expected to make a full recovery. In July he underwent a second surgery on his hip.

Leahy has made a number of public appearances since then.

Leahy won his first Senate election in 1974. He’s the last of the so-called “Watergate babies,” the surge of congressional Democrats elected in 1974 after Republican President Richard Nixon resigned to avoid impeachment.

Leahy ranks as the longest-serving senator, although President Joe Biden won his first Senate race in 1972, two years before Leahy.

By the end of his term, Leahy will have served eight terms and 48 years in the Senate.

Leahy — as the longest-serving member of the majority party — serves as president pro tempore of the Senate, and so he’s standing third in line for the presidency, behind the vice president and the House speaker.

As Senate president pro tempore, Leahy has sometimes presided over the Senate in the event of the vice president’s absence. For example, Leahy handled Trump’s second impeachment trial.

The Senate will meet on Friday. It remains unclear whether Leahy will attend… or how long he’ll remain absent.

In a 50-50 Senate, an absent senator can jeopardize his party’s agenda.

Sen. Leahy’s office says he “was not feeling well and was taken to a Washington area hospital for tests, as a precaution.  He had been at their residence in McLean, Virginia, at the time.  At the recommendation of his doctors, he is expected to remain overnight for observation”