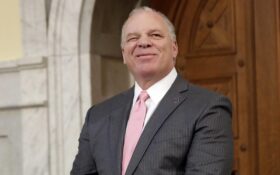 Sweeney’s defeat was unexpected and threw his party’s legislative leadership contest into limbo on Wednesday, when he postponed a meeting set for Thursday. Sweeney had been expected to return as Senate president, but who’ll take over and what margin Democrats will have in the state Legislature is unclear.

“It is stunning and shocking and I cannot figure it out,” said Senate Majority Leader Loretta Weinberg said in an interview.

Sweeney has served as Senate president since 2010 and was responsible for shepherding Democratic Gov. Phil Murphy’s progressive agenda through the Legislature, including a phased-in $15 an hour minimum wage, paid sick leave and recreational marijuana legalization.

He is also known for his high-profile reversal on opposition to gay marriage. Sweeney said in 2011 that he made the “biggest mistake of my legislative career” when he voted against marriage equality.

Though Sweeney was a fellow Democrat, he fought Murphy at the start of his administration over raising income taxes on the wealthy and worked closely with Republican Chris Christie during his eight-year term in office ending in 2018.

For instance, Sweeney worked out a deal with Christie to overhaul the public worker pension in which workers gave up cost of living increases in exchange for regular state payments to the retirement fund.

The compact with Christie put Sweeney at odds with public sector unions, who would go on to become key supporters of Murphy.

Sweeney’s loss was cheered by progressive Democrats from southern New Jersey, who saw him as a product of transactional, machine politics.

“Today is glorious,” said Sue Altman, director of New Jersey Working Families, in a tweet. Altman is a longtime critic of Sweeney’s control over the party and saw him as focused on trying to maintain that control, particularly in southern New Jersey.

His allies say he was open-minded and who eventually delivered for the left.

“I think he was a remarkable senator and Senate president, and as I have often reminded my progressive friends that we never could have gotten all those bills on Gov. Murphy’s desk for him to sign without the cooperation of the Senate president,” Weinberg said.

Among the hundreds of bills Sweeney shepherded through: recreational marijuana legalization, paid sick leave and a hike in the minimum wage — twice, once through a constitutional amendment under Chris Christie and again through a bill under Murphy.

Sweeney had faced electoral opposition before. In 2017, his feud with the state’s biggest teacher’s union over retirement benefits among other issues led to a battle in which the New Jersey Education Association spent millions to try to defeat Sweeney. The union’s effort failed.

But this year, Durr defeated him, spending $153.31, according to Election Law Enforcement Commission documents.

Messages seeking comment have been left with Durr and Sweeney.

Durr describes himself as a 2nd Amendment rights advocate and fiscally conservative, who wants to lower taxes. In an interview with NJ.com, he described how unlikely he viewed his victory to be. He has previously run unsuccessfully for state Assembly in 2017 and 2019, but this is his first elected position.

“I joked with people and I said, ‘I’m going to shock the world, I’m going to beat this man,’” Durr said Wednesday afternoon. “I was saying it, but really kind of joking. Because what chance did a person like me really stand against this man? He’s literally the second-most powerful person in the state of New Jersey.”

Sweeney is an ironworker by trade who has served as an executive with the International Association of Bridge, Structural, Ornamental and Reinforcing Iron Workers. He is also a key ally and friend of Democratic power broker, George Norcross, who’s widely considered to be one of the most powerful unelected people in the state.

It’s unclear who will become the next Senate president. If Democrats maintain control of the chamber, as incomplete results show they could do, then Democratic senators will meet to choose their next leader.