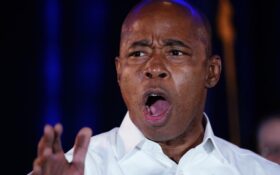 Throughout his tenure, Texas Gov. Greg Abbott — a Republican from a state on the border — has criticized sanctuary cities for their lack of cooperation with immigration authorities regarding illegal aliens.

In particular, Abbott has focused his criticism on New York City Mayor Eric Adams… and Adams escalated the feud on Sunday.

Adams slammed the governor while greeting a bus full of illegal aliens sent to New York City by Abbott.

Specifically, Adams accused the governor of creating a crisis — by making New York, not Texas, handle some of the illegal immigrants pouring over the U.S.-Mexico border.

“This is horrific when you think about what [Abbot] is doing,” Adams told the press at Port Authority, according to Gothamist. “New York is a city that has always represented democratic values. Showing our values. That’s what we’re doing today.”

Adams also demanded help from the federal government to deal with the crisis.

.@GregAbbott_TX used innocent people as political pawns to manufacture a crisis. New Yorkers are stepping up to fix it — that’s our city’s values.

But we need the federal government’s help — money, technical assistance and more. pic.twitter.com/cOdXrULpcC

The Texas governor defended his decision. He described it as a natural consequence of the New York mayor’s actions by making the city a “sanctuary city” where illegal immigration laws are not enforced.

It is legal to show up at the border and ask for asylum, and these asylum seekers have to wait somewhere. Even the Biden administration has been flying these migrants to other destinations, presumably in an effort to manage the cascade of asylum seekers.

“In addition to Washington, D.C., New York City is the ideal destination for these migrants, who can receive the abundance of city services and housing that Mayor Eric Adams has boasted about within the sanctuary city,” Abbott said in a statement Friday. “I hope he follows through on his promise of welcoming all migrants with open arms so that our overrun and overwhelmed border towns can find relief.”

New York City has pleaded with federal officials for relief… but reportedly has not conducted any similar talks with Texas officials.

“Our budgets are impacted because no one plans for [4,000] or [5,000] or 6,000 or even more people to arrive, so they need a shelter,” New York City Immigrant Affairs Commissioner Manuel Castro told Gothamist Sunday. “And so of course, that’s the assistance we are seeking the federal government to step in.”

“Frankly, they’re not communicating, coordinating at all,” Castro said. “This is meant to be disruptive, and that’s unfortunate. Because we’re talking about people’s lives.”

In reality, Abbott has recently invited Adams to visit his state.

“As Governor, I invite you to visit our border region to see firsthand the dire situation that only grows more urgent with each passing day, and to meet with the local officials, who like yourselves, realize this matter deserves immediate federal action,” Abbott wrote in an open letter Friday.

“If we could educate more leaders across this country about the chaos caused by the Biden Administration, that would compel the Administration to step up and do its job under the Constitution and enforce the immigration laws that have been passed by Congress,” Abbott told Maria Bartiromo of Fox News, according to his website.