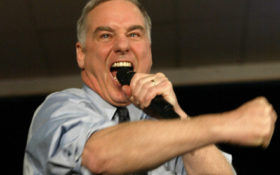 The Democratic Party are going to gain 8 seats in the U.S. Senate in the 2022 midterm election, former Democratic National Committee chairman and 2004 presidential hopeful Howard Dean — including a seat in Iowa, among others.

Dean claimed in an appearance on MSNBC’s “The Katie Phang Show” on Sunday that the Democrats are poised to flip eight seats in November.

“The real driver for us is going to be two things. One has already happened, and that was the so-called Dobbs decision when Roe v. Wade was thrown out,” Dean said. “That has put an enormous amount of turmoil into this election.”

“The second day something that hasn’t happened yet, but if it does happen, I think we are going to pick up seats in the House, and I think we’ll pick up the seats in the Senate in any case,” he continued. “And that is forgiveness of student loans. The age group that favors Democrats most significantly is under 35.”

“Those folks often sit out midterm elections and are disillusioned with President Biden. So I think the student loan stuff is essential,” Dean said.

“People are going to be driven in droves — particularly young women — over the abortion being thrown out by the right-wing Supreme Court,” he said. “So, I am very optimistic about our prospects in November.”

“I think the intensity on the Democratic side is going to be driven by abortion,” Dean said. “It is hard to take rights away from 50% of the population that they have had for 50 years. That is right the right-wingers have done.”

“I think they’re going to pay a price for that. I think we can pick up three to five and possibly even eight seats in the Senate,” he said.

“I think Iowa is in trouble for the Republicans, places that you didn’t expect.”

“I think Florida is in trouble for the Republicans, North Carolina in addition to the ones that really always talks about like Pennsylvania,” Dean concluded.

Will Democrats win big in November?

Or will a red wave give control of the House of Representatives and the Senate back to the Republican Party?

Will Democrats lose control of Congress after November?