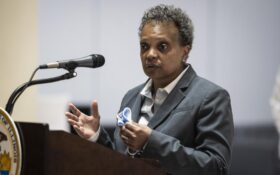 Democratic leaders are calling for more civility in politics and claiming conservatives need to tone it down.

“The toxicity in our public discourse is a thing that I think we should all be concerned about,” she said at an Independence Day celebration. “We’re not like a lot of other countries where their version of Independence Day is marked with troops and tanks. No, what we do in the United States is come together as a community.”

Most Americans of either party would agree with that, except the notoriously foul-mouthed Lightfoot has been a fairly consistent example of “toxicity in public discourse.”

Just days earlier, she dropped an f-bomb at a public event in reference to Supreme Court Associate Justice Clarence Thomas.

TownHall posted the footage of her call to end toxicity side-by-side with her rant against Thomas over his position on abortion.

Lori Lightfoot today: "The toxicity in our public discourse is a thing that I think we should all be concerned about."

She’s hardly alone; many on the Left have been protesting the Supreme Court not just at the Court and not just online, but by having protests outside the homes of Supreme Court justices.

That’s not only an attack on their privacy – and that of their families – but a disturbance for entire neighborhoods.

It got so bad that the marshal of the U.S. Supreme Court called on authorities in Maryland and Virginia – where the justices live – to do a better job of enforcing local laws.

“For weeks on end, large groups of protesters chanting slogans, using bullhorns, and banging drums have picketed Justices’ homes in Virginia,” Marshal Gail Curley wrote to Virginia Gov. Glenn Youngkin, according to NPR. “This is exactly the kind of conduct that Virginia law prohibits.”

It’s also exactly the kind of toxicity Lightfoot just decried… and tacitly encouraged with her own verbal assault on Thomas.

This decline in civility has turned extreme in some cases.

Just last month, a 26-year-old California man was arrested near the home of Associate Justice Brett Kavanaugh. He had a gun, and reportedly wanted to kill Kavanaugh because of the leaked draft opinion overturning Roe v. Wade, according to The Washington Post.

While toxicity has long been a problem for extremists on both sides of the aisles, the Left has increasingly made it part of their political playbook, especially after Donald Trump’s victory in 2016’s presidential election.

Members of his administration and lawmakers who supported him were harassed in public, including when attempting to have dinner with family members.

This form of toxicity wasn’t decried by the mainstream figures of the Left.

“Let’s make sure we show up wherever we have to show up. And if you see anybody from that Cabinet in a restaurant, in a department store, at a gasoline station, you get out and you create a crowd. And you push back on them. And you tell them they’re not welcome anymore, anywhere. We’ve got to get the children connected to their parents,” Rep. Maxine Waters, D-Calif., said at the time, according to CNN.

Last year, Waters called on protesters to get “get more confrontational” with police.

That makes any plea against “toxicity” from the Left seem extra hollow.