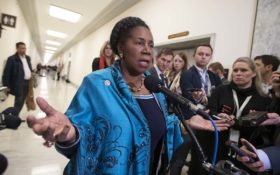 A longtime Democratic congresswoman is coming under fire for ugly allegations that she tried to PUNISH an employee for the most outrageous reason possible.

The employee says she was trying to take action against an alleged rapist!

Rep. Sheila Jackson Lee, D-T.X., who’s served in Congress since 1995, is accused of firing the unnamed employee, who at the time was planning to take legal action against the Congressional Black Caucus Foundation where Jackson Lee was chair.

The victim had previously been an intern at the foundation in 2015. While there, the court filings claim, she was raped by her supervisor.

The court documents read like a nightmare; the victim, then 19, was allegedly given a “large quantity” of alcohol by her supervisor. As the events unfolded she desperately texted a friend for help, with the messages becoming increasingly incoherent and then stopping.

Last year, when she was working for the congresswoman’s office, she said she had planned to take legal action against her alleged assailant.

Instead of getting support, she says she got canned just three weeks later!

The victim says she never spoke directly with the congresswoman about the issue, according to the suit. However, she believes the congresswoman’s office “unlawfully retaliated” against her by terminating her after she told them about her plans.

She is seeking $75,000 in damages, according to the lawsuit.

Jackson Lee denies the claims and says the employee was let go for budgetary reasons.

“The congresswoman is confident that, once all of the facts come to light, her office will be exonerated of any retaliatory or otherwise improper conduct and this matter will be put to rest,” a statement released by her office said.

But the lawsuit has already had huge ramifications.

She claims it’s because she doesn’t want to be a “distraction.”

But that may not be the whole story.

The New York Times said the foundation told her she’d better resign – otherwise, they were going to vote to remove her.

Rather than face the public humiliation of a removal vote, she stepped down.

Jackson Lee has a history of outrageous and divisive statements. In 2010, she even compared the Tea Party to the KKK.

“All those who wore sheets a long time ago have now lifted them off and started wearing clothing, with a name, say, ‘I am part of the Tea Party,” she said at the time, according to the Missouri political blog Show Me Progress.

Behind the scenes, she’s allegedly even more unpleasant. The Washington Examiner called her “one of the worst bosses in Washington.”

And that’s saying something.

Ironically, Jackson Lee has a habit of talking tough when it comes to violence against women – including statements that may seem more than a little hypocritical in light of the allegations.

“I stand firm in my commitment to seize the moment and ensure that Congress reauthorizes the landmark Violence Against Women Act, a law that has proven critical in the lives of so many survivors,” she said last year in support of the bill. “Congress must continue sending the clear message that violence against women is unacceptable.”

But according to the lawsuit, that wasn’t the message her office sent when it mattered most.