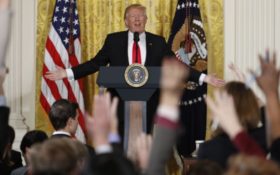 President Donald Trump has had a turbulent relationship with the mainstream media throughout his short tenure. As fake news continues to plague the truth in Washington, even top Democrats are running to the president’s defense.

Former Democratic presidential candidate Lincoln Chafee defended Trump on Tuesday against a tiresome “full onslaught” by the “mainstream media” — and says he can relate to the commander-in-chief’s struggles.

Chafee, a former U.S. senator and Rhode Island governor, told WPRO-AM he saw issues with the media firsthand during his own 2016 run. He said reporters focused on his advocacy of the metric system, a topic he himself introduced in his announcement for president… and ignored everything else.

“They immediately went to trivial things like metric, and during the debate, they gave me eight minutes out of two hours,” he said.

Chafee, who failed to gain traction during his run and withdrew months before any primaries, also complained that he had never been invited on any Sunday morning news TV shows.

He said he believes the dishonest media have been against Trump “right from the beginning.”

“He won. I didn’t vote for him, but he won, and let’s let him get his feet under him and try and build an administration, and move on,” he said.

On Tuesday, he said he wouldn’t rule out another run for Rhode Island governor and even joked that there’s a presidential race in 2020.

Chafee isn’t the only Democratic presidential candidate to have defended Trump.

Former Democratic Virginia Senator Jim Webb, who also unsuccessfully ran for the Democratic nomination, has been outspoken about his promise not to vote for Democratic nominee Hillary Clinton. Following Trump’s victory, Webb praised him saying, “I would like to salute Donald Trump for his tenacity and uniqueness of his campaign.”