Top Dem: The border crisis is over!? - The Horn News 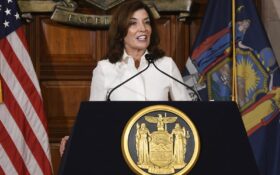 In two weeks, Gov. Kathy Hochul, D-N.Y., will face her first election as an incumbent governor.

In the debate, Hochul apparently declared an end to the crisis. As a source, she cited her private conversations with President Joe Biden.

“We’ve already seen a stemming of the tide of people,” Hochul said onstage, according to Breitbart News. “I’m talking to the president of the United States about this because I talked to Joe Biden and his chief of staff on multiple occasions.”

What’s more, Hochul gave Biden all the credit for “solving” the border crisis… and she slammed Texas Gov. Greg Abbott for sending migrants to New York.

“He understood our frustration that this really is a federal problem,” Hochul said, according to The City. “These people shouldn’t be used as political pawns by these governors… That’s disgraceful.”

Zeldin accused Hochul of hypocrisy and of painting DeSantis as a “boogeyman,” according to The City.

It has long been legal to show up at the border and apply for asylum. Earlier this year, the Supreme Court even upheld Biden’s policy of allowing asylum seekers to wait in the U.S. instead of Mexico during the application process, although the court also allowed for any future president to cancel Biden’s policy.

Critics say the policy is foolish because it allows illegal immigrants to simply lie about their asylum status… and then vanish into the country before their court hearing.

In border states like Texas and Arizona, the governors have repeatedly complained to the president about an unmanageable tsunami of asylum seekers. Other governors, like Minnesota Gov. Tim Walz, have sent National Guard troops to the border in order to assist Texas in managing the uncontrollable flood of illegal immigrants.

Hochul has been dealing with low approval ratings for a Democrat governor of a deep blue state, according to a June survey from Politico/Morning Consult. She’s only polling only four points ahead of Zeldin, according to a Quinnipiac University poll from earlier this month.

Relatedly, Hochul wasn’t voted into office. She was selected as the running mate of disgraced former Gov. Andrew Cuomo, and she assumed office upon his resignation.

Hochul is the first governor since Franklin D. Roosevelt to hail from upstate. Before working in the Cuomo administration, she represented the Buffalo suburbs in the U.S. House.

About two thirds of the state’s population live downstate, according to the New York Transportation Department’s definition of the term.

Zeldin hails from the suburbs southeast of New York City suburbs… and he’s slammed Hochul for her out-of-touch remark about the Long Island Expressway.

Hochul: "People love the LIE now, it's just out there, Southern State…"

We're breaking down the debate this morning on @News12LI. What are your key takeaways? pic.twitter.com/hUCtssWuIA