Top Dem DEMANDS more taxes because... WHAT!? - The Horn News 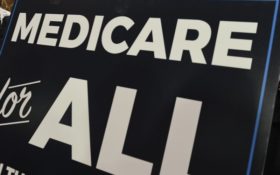 Democratic New Jersey Sen. Cory Booker’s 2020 presidential campaign is struggling, so his latest radical idea is to dig into the pockets of the American people.

And he’s expecting us to smile while he does it. Booker thinks the more patriotic you are, the more taxes you should be forced to pay.

During an interview Sunday on CNN’s “State of the Union,” Booker declared: “We live in a nation with far more patriotism than people are expressing. What I mean is, folks want the best for the country.”

Booker suggested that hardworking Americans should be happy to foot more of the government’s astronomically expensive bills.

Bills that would only grow more costly under radical liberal leadership.

Host Jake Tapper asked why the 2020 Democrats are all fixated on policies that force major tax hikes on Americans.

Booker summed it up in one sentence: He thinks they owe it.

“We live in a nation with far more patriotism than people are expressing,” Booker replied.

“This is a moment where across this country, farm towns, factory towns, cities to suburbs, we have so much common pain where Americans are seeing, from the cost of prescription drugs, cost of college, we’re all hurting because we have not designed an economy that invests in each other,” he claimed.

Of course, Booker didn’t bother to mention his cozy relationships with “Big Pharma” companies that over-prescribe deadly pills. For years he’s been cashing in major donations from some of the biggest pill-making companies in the world.

The New Jersey progressive, who is barely polling above 2.5 percent in the crowded Democratic primary field, has been full of bad ideas lately.

In March, Booker attacked Christians and claimed that he would “rather hang out with a nice atheist.”

His comments came during a CNN town hall, where Booker was asked how faith would influence him if he were in the White House.

“I would rather hang out with a nice atheist than a mean Christian any day of the week,” Booker said.

Who is supposed to pay for it all should he get elected?

YOU are, he says.