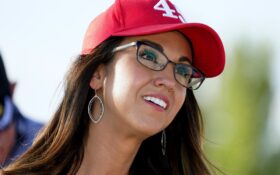 A businessman from Colorado reportedly told Breitbart News he was previously involved in a blackmail scheme with a current Democratic congressional candidate in the state back in 2017.

However, Boerbert was favored to win re-election, according to recent polls, even before the alleged blackmail scandal was made public on Thursday.

According to Breitbart, buinessman Todd Gardner claims he blackmailed Frisch into changing his vote while the Democrat was serving on the Aspen City Council “regarding a crucial multi-million dollar transportation project” five years ago.

Gardner, the former owner of the High Mountain Taxi service in Aspen, Colorado, said he had video evidence of an extramarital affair Frisch was engaging in at the time. He claimed that he used that footage to coerce Frisch into changing his vote to one favorable to his former taxi business.

“Was it a necessary thing to do based on the situation and me fighting for our survival and the fact that the city was trying to totally go above and beyond any purview they had to put me out of business basically? It was my fight for survival,” he said. “I made a choice, just like Adam made a choice to [have an affair]. I made a choice to use the information I had for my benefit.”

Gardner claimed he is not coming forward to help Boebert’s re-election campaign. In fact, he claims to dislike the freshman congresswoman.

“I don’t like her. I don’t think she has a clue,” Gardner reportedly said. “I would never donate to her.”

Boerbert’s campaign pounced on the news and called Frisch unfit to serve in office.

“Adam Frisch changing his vote as an Aspen city councilman so he could hide an extramarital affair makes it clear Adam Frisch has no business being in public office. His wife and children do not deserve to be dragged into his mess. That said, Adam Frisch should absolutely be held accountable for being a corrupt politician,” Boerbert’s campaign said in a statement to Breitbart.

While he has consistently trailed in polls, Frisch has recently expressed confidence that a moderate coalition could oust Boerbert from Congress and help Democrats pick up a seat in the 2022 midterm election.

His campaign has not yet made a statement regarding the blackmail allegations.

Six of us ran for the seat in the primary: Three Rs and Three Ds. Five of us are now united against Boebert and together received 55% of the vote. She got 45%…

I'm going to pull it off! https://t.co/mUhEyFEQNK