Dem boss' abuse investigation is wrapping up - The Horn News 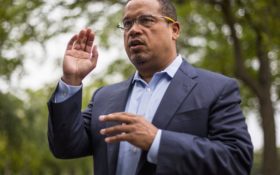 Minnesota’s Democratic Party chairman said Monday that he expects an investigation of allegations of physical abuse against Rep. Keith Ellison, co-chair of the Democratic National Committee, to be completed and released soon, well ahead of the November election.

The Democratic National Committee deputy chairman has denied the allegations, but the recent sexual assault allegations that have cast a shadow Brett Kavanaugh’s Supreme Court nomination has renewed focus on Ellison. Many Republicans have called the Democrats’ handling of the scandal hypocritical.

Ellison’s former girlfriend, Karen Monahan, said Ellison once dragged her off a bed by her feet while screaming obscenities. She claims to have video footage of the 2016 incident but has refused to release it, saying it’s embarrassing.

In Minnesota and Washington, Republicans have called Democrats hypocrites for stalling Kavanaugh’s nomination in the Senate while failing to address Ellison’s situation. Republican Karin Housley, running against Democratic Sen. Tina Smith to complete former Sen. Al Franken’s term, bashed Smith for campaigning with Ellison as she calls for an investigation of Kavanaugh.

Minnesota Democratic-Farmer-Labor Party Chairman Ken Martin said he believes the investigation has concluded and that a final report should be issued in the coming days.

“I’m starting to get a little frustrated because it’s been a long time now, almost two months,” he said. “I hope soon. I hope any day here.”

While the state party’s attorney initially investigated the allegations against Ellison, Martin decided after the August primary to hire an external investigator to ensure “that it wouldn’t be colored by people with associations with the party.” They hired Susan Ellingstad, a partner at a Minneapolis law firm with state party attorney Charlie Nauen.

The Democratic National Committee also is waiting on the state party. Chairman Tom Perez directed Martin to lead the review of Ellison’s conduct rather than have the national party conduct a separate investigation.

Democrats in Minnesota are concerned that the allegations against Ellison could impact their chances in November to hold onto an attorney general’s office they’ve held for more than four decades. Public polling shows Ellison in a close race with Republican Doug Wardlow, a little-known former state lawmaker who has turned the allegations into a campaign issue.

A recent poll performed for the Star Tribune and Minnesota Public Radio News showed Ellison with just 41 percent of voters’ support— a 5 percentage point edge over Wardlow — while more than 18 percent of respondents were undecided. The poll surveyed 800 likely voters between Sept. 10 and 12 and had a margin of error of plus or minus 3.5 percentage points.

Their race has been marked by a slow drip of developments in those allegations. Monahan recently published medical records from late 2017 on Twitter, in which she relayed to a doctor emotional and physical abuse from a former partner she identified as Ellison and that she “worried about retribution if she identifies him publicly.”

An earlier medical record that Monahan also published on Twitter mentions a past “emotionally abusive relationship.”