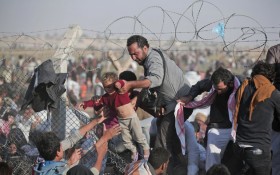 According to The Washington Free Beacon, O’Rouke’s has begun running 2020 presidential campaign Facebook ads in Mexico.

Of course, Mexican citizens can’t vote in the 2020 presidential election or primary. It’s unclear why O’Rourke’s campaign is spending money to advertise there.

Unless, of course, O’Rourke’s presidential campaign knows something the mainstream media denies — that illegal immigrants vote in American elections?

Critics say either O’Rouke’s campaign is incompetent and doesn’t know where it’s spending its money… or they know exactly what they’re doing by encouraging nonvoters to help Democrats rig the 2020 election.

O’Rourke has called for open borders in the past, after all.

If he were to be the nominee for the Democrats come November 2020, the state of Texas could potentially swing blue — especially if enough illegal immigrants were to pile through his hometown and potentially other areas of Texas and cast illegal ballots.

O’Rourke has even gone so far as to say that there is no border crisis, a trend that’s evidently changing within the Democratic party. The Washington Post reported that the number of Democrats that think the southern border is a crisis, jumped 11 percentage points between January and April.

Still, illegal votes may not be enough for O’Rouke. The latest Quinnipiac poll is bad news for the failed Senate candidate. O’Rourke is only polling at 5 percent — way behind 5 other Democratic candidates.

He can’t get Americans on his side…, so he’s looking abroad to the southern border, for illegal immigrants to save his campaign?