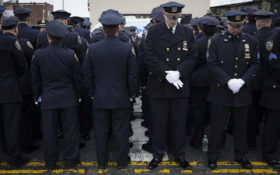 The head of Kentucky State Police is stepping down days after a report surfaced about old training materials the agency used that encouraged cadets to be “ruthless” and quoted Adolf Hitler.

Police Commissioner Rodney Brewer’s resignation is effective Wednesday, Kentucky Justice and Public Safety Cabinet spokeswoman Morgan Hall said in a statement. She did not address why Brewer is stepping down, but said Lt. Col. Phillip Burnett was selected to be acting commissioner.

Brewer was appointed by Gov. Andy Beshear in January after previously leading the agency from December 2007 to February 2016.

Beshear sidestepped questions Tuesday about whether he asked Brewer to resign. The Democratic governor thanked Brewer for his long public service career and said a broad search will be undertaken for a new commissioner.

The Kentucky Justice Cabinet has said the instructional materials were last used in 2013 and officials are working to “swiftly and thoroughly conduct an internal review of all training materials” used by state police.

At a Tuesday news conference, Beshear promised a “top-to-bottom review” of the training materials.

“We have identified at least one other PowerPoint that appears to contain some of the same information from the same trainer,” the governor said. “We have not yet been able to determine whether it is a different version, whether it was provided at a different time. We want to make sure we get answers to all of those questions.”

Beshear said in a statement Monday that officials believe the presentation was shown only once, “but it is absolutely and totally unacceptable.”

“We are checking all training materials going back in time and looking at the present,” Beshear said. “We’re committed to making this right.”

The high school paper in Louisville said the training materials were included in documents obtained by a Louisville attorney through an open records request involving a lawsuit over a fatal police shooting in Harlan County. The high school journalists at the Manual Redeye are related to a partner at the firm handling the lawsuit, the newspaper reported.