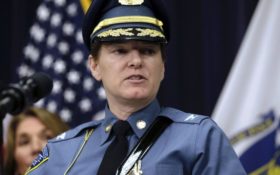 The head of the scandal-ridden Massachusetts State Police announced Wednesday that she’s retiring next Friday, abruptly ending a tumultuous two-year tenure as the state’s top cop.

Col. Kerry Gilpin largely maintained a low profile as the 2,200-member police force was rocked by waves of corruption, mismanagement and misconduct scandals.

The 49-year old, who has served on the police force for 25 years, said in her letter to staff that the agency has initiated reforms, including launching “painstaking” internal and criminal investigations, but more work needs to be done to restore the public’s trust.

“I leave this job with the satisfaction of knowing that I gave it my heart and soul, under the most trying of circumstances,” Gilpin wrote. “We have accomplished so much during this difficult time, and I am confident that you will continue to build upon this foundation.”

Republican Governor Charlie Baker, who appointed Gilpin in November 2017 after scandal felled her predecessor, thanked her for her service and hinted a successor would be named in the coming days.

“There’s a ton of reform work that still needs to be done,” he said.

Two state troopers filed federal lawsuits alleging McKeon and other top police brass had ordered the removal of embarrassing remarks from the arrest report of a local judge’s daughter.

Gilpin was quickly thrust into what became the biggest state police scandal of her tenure: an years-long overtime abuse scheme.

Baker on Wednesday credited her with expanding an internal investigation into state troopers logging in overtime hours they never worked and issuing phony tickets, which had been underway before she took the helm.

“Coming right through the front door, she dealt with one of the most significant scandals in the department’s history,” he said. “I’m really glad she followed through on it.”

Nearly 50 troopers have since been implicated, including 10 who face criminal charges. The trooper unit that polices the busy Massachusetts Turnpike and Boston’s Logan Airport has also been disbanded.

At the same time, the department under Gilpin’s watch has faced criticism for destroying or losing records related to the scandal.

The agency’s vetting and promotions process has also been called into question after it was revealed a K-9 trooper was a former drug dealer .

And troopers and staff have faced a range of criminal charges.

The agency’s former payroll director has pleaded guilty to embezzling thousands of dollars, and the former state trooper who headed of the officer’s union faces federal racketeering and wire fraud charges for allegedly embezzling union funds and for his role in a lobbyist kickback scheme.

Gilpin has said she was inspired to become an officer following the 1986 murder of her teenage sister.

That killing was unsolved until an arrest was made months into Gilpin’s tenure running the state’s largest law enforcement agency.