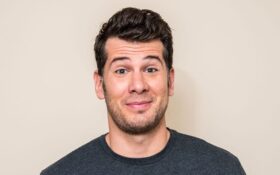 Conservatives have warned about social media freezing them out, cutting their audience off, and de-platforming them for years.

Now, a leading conservative activist is fighting back against “Big Tech” censorship by hitting them where it hurts — their wallet.

Talk show host and media sensation Steven Crowder has filed a lawsuit against YouTube for trying to silence him for his point of view.

Crowder says that the video streaming website has demonetized him, throttled down his traffic, and removed videos even though they didn’t actually violate its terms of service… all because YouTube didn’t like what he has to say.

Crowder’s had a series of battles with YouTube because of his humorous and politically incorrect videos, which rake in tens of millions of views apiece. Crowder’s style — sitting at a table, asking people to “change my mind” — has become so popular that it’s become an internet meme.

His popularity threatens the PC narrative fueling the Google/YouTube/social media complex, so he has been silenced.

YouTube took a stab at shutting him down a few years ago. After left-wing media website Vox spent a year claiming Crowder’s jokes were “homophobic,” YouTube demonetized Crowder’s channel in June 2019. That stopped him from running ads on his videos or making a single dollar from the platform, even though he’s one of its most popular political commentators.

YouTube remonetized the channel last fall, and the clicks kept rolling in… but so did the left-wing complaints.

YouTube warned Crowder for “misinformation” about the 2020 election, then it set in motion the process of getting three “hard strikes” that would let them crackdown on the channel.

“The first hard strike was related to a COVID policy in our March 18 video of the one-year anniversary of 15 days to flatten the curve,” Crowder explained.

Then YouTube made another “hard strike” over Crowder’s analysis of a video showing a police officer shooting a teenage girl to save the life of an innocent black girl. Crowder said YouTube told him ‘the video violated the community guidelines for harassment, claiming we “reveled in the death of an identifiable person.’ Which didn’t happen.”

The video platform removed a video he uploaded on March 16 that criticized Joe Biden’s COVID stimulus plan that discriminates farmers based on their skin color. Crowder joked that Biden’s money wasn’t going to convince blacks from the inner city to start farming and did an impression that a host of the left-wing Young Turks show said was racist.

“We go into an impression of hipsters in Detroit and African-Americans living out on farms. It’s a fish out of water tale,” Crowder told John Stossel.

“I shouldn’t have to justify every joke that I make,” he added.

He says YouTube is diving deep into his archives to find anything it can twist to justify punishing his channel again.

“YouTube is actively looking for “violations” in our past videos that aren’t actually violations in order to issue a third hard strike,” Crowder said this week.

That’s why he’s fighting back in the courts.

“As of last Thursday, May 14, my lawyer Bill Richmond and I have filed a notice of a lawsuit against YouTube and are seeking an injunction to prevent them, to stop them from currently deplatforming us,” Crowder said.

“We’ve officially sent a notice of a lawsuit,” he said.

“This is the big one, boys and girls!” Crowder said.

Crowder says what happens to him will affect everybody who believes in free speech, especially online.

“Why should you care, no matter what side of the political aisle you’re on?” Crowder asked. “YouTube isn’t encouraging debate, it’s trying to squash debate, trying to eradicate ideas from its platform it simply does not like.”

“One day those ideas are about the election, then they’re about COVID, and now those ideas include applauding an officer for saving a woman’s life?” Crowder said in disbelief. “When will enough be enough?”

No tyrant is ever satisfied with the freedoms he’s taken from you; he’s always hungry for more.