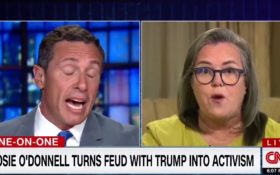 President Donald Trump’s rising approval ratings has sent the far-left into a panic — and celebrity activist Rosie O’Donnell has become so unhinged, even CNN’s Chris Cuomo can’t stomach her anymore.

O’Donnell is suffering from Trump Derangement Syndrome, and is now claiming that Trump’s political rallies aren’t attended by actual voters.

They’re all faked, O’Donnell claimed on her appearance Monday night — and Cuomo was so shocked, he had to correct her rant.

In typical CNN fashion, they opened the interview with the normal Trump bashing.

“Trump is loathed in America,” O’Donnell told Cuomo, who was interviewing her on the protest she organized at the White House over the weekend. “People are embarrassed and ashamed of who he is and, come Election Day, we’re going to stand up in the polls and let him know.”

Later, though, O’Donnell became so unhinged that Cuomo warned that she was “just playing into [Trump’s] hands.”

“He’s bad because he doesn’t know how to inspire people or evoke that emotion of truth and of knowing! What about his rallies?” O’Donnell asked, aggressively pointing at the camera. “First of all, people are paid, Chris, you know that! People were paid since he went down on the escalator. He pays people to show up at those rallies. That’s a fact!”

“Right, but I don’t know if that’s why he gets tens of thousands [of Americans] at the rallies. I think he captures a lot of emotion for people,” said Cuomo.

Even Cuomo wouldn’t sink that low.

“Rosie, I’ve seen them! He gets big groups of people to come out. He gives themes that resonate. Whether they’re positive or not that’s up to other people to decide,” said Cuomo.

“Those are not real rallies!” insisted O’Donnell.