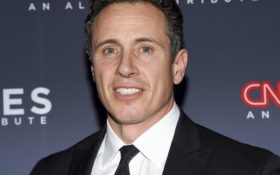 CNN star Chris Cuomo had a profanity-laden meltdown at a bar in New York City this weekend that was so ugly, President Donald Trump called him an out of control animal.

And it was all captured on video.

Fredo is a reference to the character Fredo Corleone, the weak and ignorant brother in the movie “The Godfather” played by John Cazale.

“I thought that was who you were,” the man tells a visibly irate Cuomo.

“No, punk-ass b****es from the right call me ‘Fredo.’ My name is Chris Cuomo,” an angry Cuomo said. “I’m an anchor on CNN. ‘Fredo’ was from ‘The Godfather.’ He was a weak brother and they use that as an Italian slur.”

“Isn’t that your brother, though?” the man asked.

Cuomo was just getting started. One of the men said he was “partial Italian” when he was asked.

“You’re a much more reasonable guy in person than you seem to be on television,” the man said sarcastically. That’s when Cuomo blew his lid.

“If you wanna play, then we’ll f***ing play. If you’ve got something to say about what I do on television, then say it, but you don’t have to call me a f***in’ insult,” Cuomo replied.

“Hey man, listen, I don’t want any problems,” the man, who appears to be holding the camera from below, told Cuomo.

“What’s the problem? I didn’t insult you,” the man asked.

“You called me ‘Fredo’ — like I call you a punk b***h. You like that? You want that to be your nickname?” Cuomo angrily asked.

The man said he didn’t know what Cuomo’s name was, and the CNN star began pointing his finger in the man’s face. “Don’t be a liar. Stand up like a man,” Cuomo said. “If you wanna be a man, I’m here.”

The man continued to plead his ignorance, and Cuomo grew increasingly upset. “Own what you said. You’re gonna have a f***ing problem.”

“What, what are you gonna do about it?” the man replied, getting defensive.

“I’ll ruin your s**t,” Cuomo replied, batting away a man’s hand trying to calm him down. “I’m gonna throw you down these f***ing stairs like a f***ing punk.”

“Please do,” the man replied.

“Why, so you can sue? So you can f***ing sue?” Cuomo responded, and began to demand the man “take a swing” so they could fight.

You can see the ugly meltdown here.

Warning: There is vulgar language used throughout the video.

Cuomo: "You're going to have a problem"

Man: "What are you going to do about it?"

Cuomo: "I'll fuckin ruin your shit. I'll fucking throw you down these stairs"

Trump responded to the footage by tweeting out that Cuomo could be “red-flagged” and banned from owning firearms because he appears so out of control.

“I say good for Chris Cuomo. He’s out with his 9 year old daughter, and his wife, and this guy is being a jack**s in front of his family,” Hannity said, and that in his opinion “Chris Cuomo has zero to apologize for. He deserves the apology.”

CNN spokesman Matt Dornic said the network stood by Cuomo, and claimed the CNN star “defended himself” after being slurred in “an orchestrated setup.”