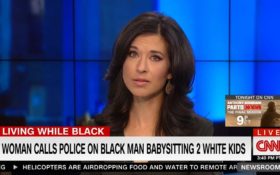 As ratings continue to fall for the left-leaning news outlet, more and more Americans continue to call out the “most trust name in news” on their unfair bias.

On air Sunday, Cabrera claimed that Trump and his son recently said that “white men have a lot to fear” — a claim that has been proven to be completely untrue.

In a segment that was focused on cases of racism, Cabrera said, “President Trump and his son Don Jr. said this week white men have a lot to fear right now.”

Trump said: "It's a very scary time for young men in America…"

Trump Jr. said he is most concerned for his sons… pic.twitter.com/ZOBOXafYJo

Except that never happened.

Earlier this month, while discussing the allegations of sexual misconduct against Supreme Court Justice Brett Kavanaugh, Trump said it was a “very scary time for young men in America where you can be guilty of something you might not be guilty of.”

Also discussing the MeToo era, Trump Jr. told the DailyMailTV, “I’ve got boys and I’ve got girls and when I see what’s going on now, it’s scary for all things,” he added that right now he fears more for his sons than his daughters because of the possibility of false accusations.

Andrew Surabian, adviser to Trump Jr. says the CNN star owes the president and his son an apology.

In a statement to The Daily Wire, Surabian said, “The provable lies and disgraceful race-baiting espoused by CNN anchor Ana Cabrera are especially shameful coming from a network that unironically brands itself as the ‘realest name in news.'”

He added, “If CNN has even a sliver of journalistic credibility left, they will issue an immediate on air apology to both President Trump and Don Jr.”

Will CNN ever issue an apology to the Trump family for the repeated lies? Or will they continue to lose all their credibility?

Shame on CNN for lying to Americans over and over again.