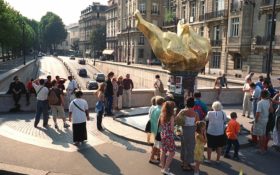 Paris City Hall wants to name a small plaza after Princess Diana, at the site of the 1997 car crash that killed the cherished British royal.

The site already holds a golden flame-shaped monument in her honor, adjacent to the Alma Tunnel where the accident occurred.

The plaza is currently named after opera singer Maria Callas. A city hall official said Thursday that the city council will vote next month on a measure to rename it after Diana. The city noted that Callas already has a nearby avenue named after her, and that the city wants to honor Diana for her humanitarian work.

The 36-year-old princess, her boyfriend and driver died after their Mercedes crashed into a concrete pillar in the tunnel.