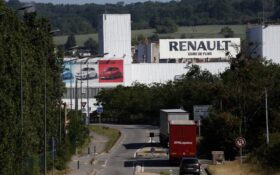 Struggling French carmaker Renault on Friday announced 15,000 job cuts worldwide as part of a 2 billion-euro cost-cutting plan over three years, as the company is in bad shape amid declining sales.

The group’s global production capacity will be revised from 4 million vehicles in 2019 to 3.3 million by 2024, the company said.

“The difficulties encountered by the group, the major crisis facing the automotive industry and the urgency of the ecological transition are all imperatives that are driving the company to accelerate its transformation,” the statement said.

Jean-Dominique Senard, chairman of the board of directors of Renault, said at a news conference that “each decision, each cost cut has been weighed at length with employees in mind.”

Senard said that there will be no firings as the company is launching talks with unions about the plan.

Renault will use retraining measures, internal mobility and voluntary departures “to find solutions everywhere for people that would be affected,” he said.

Renault’s leadership is “convinced that these are the right decision,” he added. The COVID-19 crisis “only adds to the emergency of this plan.”

The group, which employs 180,000 workers worldwide, announced the suspension of planned capacity increase projects in Morocco and Romania.

The group is also considering “adaptation” of its production capacities in Russia and announced the halt of Renault-branded oil-powered car activities in China.

Renault will close one site in France, in Choisy-le-Roi, south of Paris, which employs about 250 people.

The group aims to focus its 13 other French sites on “areas with a promising future” including electric vehicles, light commercial vehicles and high value-added innovation.

Interim chief executive officer Clotilde Delbos said no other factory closure has been decided at this stage in France or abroad.

Renault’s new chief executive, Luca de Meo, the former head of Volkswagen’s Seat brand, will provide his “strategic vision” when he starts on July 1, she said.

Renault came into the coronavirus crisis in particularly bad shape: Its alliance with Nissan and Mitsubishi is a major global auto player but has struggled since the 2018 arrest of its longtime star CEO Carlos Ghosn.

The group reported its first losses in years in 2019.

The French government is its single biggest shareholder with a 15-percent stake, and has been in talks on a 5 billion-euro loan guarantee.

Senard said he expects the government loan guarantee to be formally signed soon. Finance Minister Bruno Le Maire earlier this week that the group’s survival is at stake.

The crisis is not hitting all automakers equally: while Renault is cutting billions in costs, Volkswagen is investing 2 billion euros ($2.2 billion) to expand its presence in China’s electric car industry in the biggest foreign investment announced since the country’s economy began to reopen following the coronavirus pandemic.