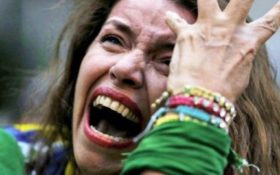 Is there anything out there that leftist college students WON’T protest?

These precious little snowflakes will go ballistic over just about anything that “triggers” them. They’re set off so easily that it’s hard to make a list of the dumbest campus controversies in recent years.

There are too many to choose from!

When a teacher at Reed College recently played a 40-year-old video of Martin performing the song on “Saturday Night Live,” students freaked out. They complained that it was “like somebody … making a song just littered with the N-word everywhere,” The Atlantic reported.

These same kids no doubt love every moment of Alec Baldwin’s dull and unfunny portrayal of President Donald Trump on the same show today.

Last year, students at the once-respected Cornell University staged one of dumbest protest of all time after President Donald Trump won the election.

They were so triggered that they held a “cry in” where… yes… they gathered together to openly sob over the loss of Hillary Clinton.

In 2015, the University of Illinois at Urbana-Champaign declared that white people in a room was a form of “microagression.”

Sponsored: You and Elvis may have this in common…

“Students of color reported feeling uncomfortable and unwelcomed just walking into or sitting in the classroom, especially if they were the only person of color, or one of a few,” stated the report, according to The National Review.

You can’t make this stuff up, folks!

In May, two Yale University students were honored for angry protests over… get this… Halloween costumes!

A Yale professor and his wife – also on the staff there – were bullied into resigning after defending the right to wear potentially insensitive costumes.

“This year, we seem afraid that college students are unable to decide how to dress themselves on Halloween,” wrote Erika Christakis, then associate head of Silliman College. “Is there no room anymore for a child or young person to be a little bit obnoxious… a little bit inappropriate or provocative or, yes, offensive?”

Nope. There is no room. She and her husband were forced out, and the students that led those protests were given a big award this year for “enhancing race and/or ethnic relations,” according to Campus Reform.

Nearly 20 years after his show went off the air, most of America still loves Jerry Seinfeld.

Everyone… that is… except college students.

Sponsored: They’d KILL me if they knew I sent this to you…

Seinfeld says he can’t perform on campuses because the kids are too easily offended by his jokes, despite the fact that he’s one of the tamest acts in comedy.

“They just want to use these words: ‘That’s racist;’ ‘That’s sexist;’ ‘That’s prejudice,’” he told ESPN Radio with Colin Cowherd in 2015. “They don’t know what the hell they’re talking about.”

Even the leftist New York Times is taking a stand, publishing an opinion piece by columnist Frank Bruni calling for an end to “campus inquisitions.”

“(W)e’re never going to make the progress that we need to if they hurl the word “racist” as reflexively and indiscriminately as some of them do, in a frenzy of righteousness aimed at gagging speakers and strangling debate,” he wrote.

That was six months ago, before the “Funky Tut” protests.

Clearly, students still haven’t learned a thing. Not only is irony dead, but it’s taking education down with it.