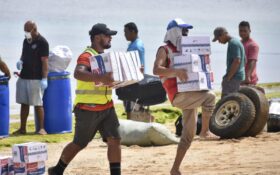 Samantha Moala recalls she was taking a shower at her home in Tonga when she heard what sounded like a gunshot so powerful it hurt her ears.

As she and her family scrambled to their car to drive inland, ash blackened the sky. The world’s biggest volcanic eruption in 30 years sent a tsunami around the globe, and the first waves washed across the road as Moala drove to safety at the airport with her terrified husband and two sons.

A volunteer with the Tonga Red Cross, Moala, 39, was soon attending to the cuts other people had suffered as they escaped, and giving them psychological support. She said about 50 of them stayed for two days at the airport until they got the all-clear to go back home.

“People were all shocked,” she said. “But I got to mingle with them, help them, get them to be confident. It’s a small little island, and we got to know each other in two hours.”

Three months after the eruption, Tonga’s rebuilding is slowly progressing, and the impact of the disaster has come into clearer focus. Last week, the prime minister handed over the keys to the first rebuilt home of the 468 the government plans to reconstruct across three islands as part of its recovery program.

Some 3,000 people whose homes were destroyed or damaged initially sought shelter in community halls or evacuation centers. Eighty percent of Tonga’s population was impacted in some way.

In the first few weeks after the eruption, Moala helped out by putting up tents and tarpaulins, and then by cooking food for other volunteers.

It took five long weeks for Tonga to restore its internet connection to the rest of the world after the tsunami severed a crucial fiber-optic cable. That delayed some families from abroad from being able to send financial help to their loved ones.

Three people in Tonga died from the tsunami and a fourth from what authorities described as related trauma. The sonic boom from the eruption was so loud it could be heard in Alaska and a mushroom plume of ash rocketed a record 58 kilometers (36 miles) into the sky.

The World Bank estimates the total bill for the damage is about $90 million. In the small island nation of 105,000 people, that’s equivalent to more than 18% of gross domestic product.

The bank noted that many coastal tourism businesses — which bring in vital foreign revenue for Tonga — were particularly hard hit, with tourist cabins and wharves destroyed. The agriculture industry also suffered, with crops lost and reef fisheries damaged.

The ANZ bank says Tonga’s GDP will likely contract by 7.4% this year, after it had been expected to grow by 3.7% before the volcano erupted.

The international community has been helping out, with Tonga able to secure $8 million in funding from the World Bank and $10 million from the Asian Development Bank, as well as aid assistance from many places including Australia, New Zealand, Japan, the European Union, the U.S. and China.

But progress has been hampered by the nation’s first outbreak of COVID-19, which was likely brought in by foreign military crews who raced to drop off supplies as the ash cleared. The outbreak prompted a series of lockdowns, and the country remains in a state of emergency.

Moala is among the more than 8,500 Tongans who have caught the coronavirus since it began spreading through the islands. Eleven people so far have died. Moala said the outbreak had affected many businesses, including her husband’s work as a tattoo artist.

But as the outbreak ebbs and the rebuilding progresses, the islands’ familiar rhythms are returning for many people.

Among those who remain most affected are the 62 people who lived on Mango Island and about another 100 on Atata Island who may never be able to return home.

The islands are located very close to the Hunga Tonga Hunga Ha’apai volcano, and the villages were completed wiped out. Residents have now been offered land by Tonga’s king to relocate onto one of Tonga’s two main islands.

Sione Taumoefolau, the secretary-general of the Tonga Red Cross Society, said there is a lot of work to be done relocating the residents.

It’s also been slow-going getting supplies to people on other far-flung islands, he said. Many of them remain without internet access after a domestic fiber-optic cable was also damaged and will likely not be repaired for months.

“Three months later, people are starting to get back to normal,” Taumoefolau said. “But we can see they still need psychological and social support, those that were really impacted, especially those who have to relocate.”