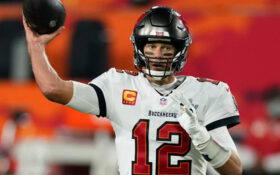 Pundits have questioned how long the future Hall of Famer will play, and what comes next in Brady’s storied career.

Reports are that he’s headed to Fox.

But he won’t be replacing longtime host Sean Hannity in primetime, or making a foray into politics as other celebrities have been rumored to.

Instead, his name is being attached to a major “unscripted series.”

As of now, details remain sparse. em> Deadline reports that Brady has a project in the works with network, however.

Fox Entertainment CEO Charlie Collier confirmed the in a statement. “We also have an unscripted project with Tom Brady. Yes, that Tom Brady.”

According to the report, the show will be produced by Brady’s personal production company, 199 Productions.

The veteran quarterback has reportedly been working with directors to produce documentaries, films, and television shows.

In March of 2020, Brady had announced his first official movie as the second half of his career transitions into Hollywood — with the project entitled Unseen Football — which is purportedly geared to take an intimate look at all levels of football in what is supposed to be Brady’s love letter to football.

The Fox Entertainment announcement was purportedly made amid a massive reveal of the network’s anticipated programming, including “NFL on Fox,” “Fox Sports Saturday,” and “WWE’s Friday Night Smackdown.”