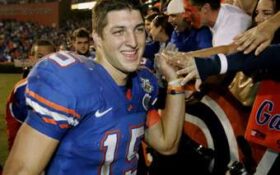 When Tebow announced his retirement from baseball after five years in the New York Mets development system, it seemed like the end of his storied professional career.

But according to numerous reports, Tebow is back with his former college coach Urban Meyers, who won two national championships with Tebow and is currently the head coach of the NFL’s Jacksonville Jaguars.

After his professional football career died down, Tebow returned to baseball in 2016 for the first time since his junior year of high school and reached Triple-A, encouraged by then-general manager and current team president Sandy Alderson.

Now he’s eyeing a big NFL return — but not as a quarterback this time. The 33-year-old Tebow wants a second chance in the NFL as tight end under Meyer’s offensive system.

Tebow played 77 games at baseball’s highest minor league level in 2019, batting .163 with four home runs. He finished his career with a .223 average over 287 games.

A transcendent quarterback at the University of Florida for his talents and outspoken Christian faith, Tebow appeared in 35 NFL games between 2010-12, winning a playoff game with Denver during the 2011 season. He was released by the Philadelphia Eagles during the preseason in 2015, the last time he appeared on an NFL roster.

He was hired by ESPN as a college football analyst in 2013 and worked in broadcasting throughout his time pursuing a chance to play major league baseball.