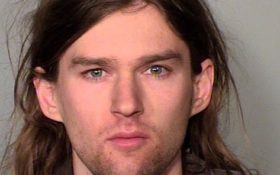 Virginia Sen. Tim Kaine was nearly a heartbeat away from the presidency — and it seems his family is very angry he lost.

So angry, in fact, his youngest son was just arrested for participating in a vicious attack on innocent people at a pro-Trump rally.

Linwood Michael Kaine and four others were arrested on suspicion of second-degree riot on March 4th, after a “March 4 Trump” rally in St. Paul, Minnesota was attacked by liberal guerrilla group known as “Black Bloc” and other anti-Trump protesters while gathered inside the state capitol rotunda.

Video shows masked rioters, dressed in all black, attacking the peaceful pro-Trump crowd with pepper spray and a stun gun. Authorities say the group also used a smoke bomb that struck a woman in the head.

Footage of the shocking violence also shows women being shoved and at least one being ambushed with chemical spray.

Other anti-Trump protesters disrupted the event with whistles and noise making devices.

Police released all five arrested suspects without filing charges, despite the vicious attacks.

How did Kaine’s father respond to the news his youngest son had been arrested for his role in the violence?

It appears he couldn’t be prouder.

“We love that our three children have their own views and concerns about current political issues,” the Virginia senator said in a statement. “They fully understand the responsibility to express those concerns peacefully.”

Peaceful, of course, being the operative word.