Tim Allen just said WHAT about Roseanne!? - The Horn News 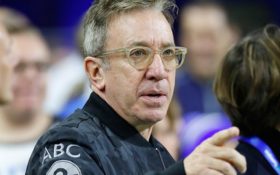 When asked about the cancellation of her show “Roseanne” due to a racist tweet she sent out about a former Obama administration official, Allen said she is not the same woman he used to know.

“You know, I go way back with Rosie and that’s not the Roseanne I know,” Allen told reporters on Thursday.

Allen explained, “My mother and I went through this.”

“And she goes, ‘What did she mean by all that?’ and I said I don’t know,” Allen admitted.

Allen, seeming a bit torn on how to feel, explained, “She was the most diverse and tolerant women I’ve ever known for a long time,” he continued. “So, whatever got in her head isn’t the Roseanne I know.”

Allen stated that “it’s a very icy time,”  in this world, and went on to add that in his 38-year career of being a comedian, he has “never seen it.”

“Like Lenny Bruce said at the Purple Onion, ‘We’ve gone backwards,'” Allen explained. “There’s things you can’t say, things you shouldn’t say and I said, ‘Who makes up these rules?’

“And, as a stand-up comic, it’s a very dangerous position for me to be in because I like pushing buttons and we’re all very sensitive,” he continued.

“And, I don’t know what Roseanne… but, I’m telling you, that’s not the woman I know. Whatever came out of that, whatever she said by that – she’s inclusive and tolerant, it’s unfortunate.”

When pressed further on the subject at the 2018 Television Critics Association Summer Press Tour in California, Allen explained that ABC did “what they had to do” in firing Roseanne. “I’m just on the other side. I know Barr, and she’s just not that person,” he  added.