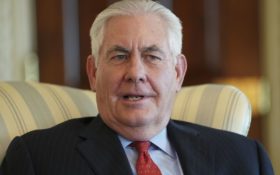 The United States would be “putting people intentionally in harm’s way” if it sent diplomats back to Cuba, Secretary of State Rex Tillerson says in an Associated Press interview, even as a new FBI report casts doubt on the initial theory that Americans there have been hit by “sonic attacks.”

Following months of investigation and four FBI trips to Havana, an interim report from the bureau’s Operational Technology Division says the probe has uncovered no evidence that sound waves could have damaged the Americans’ health, the AP has learned. The report, dated Jan. 4, doesn’t address other theories and says the FBI will keep investigating until it can show there’s been no intentional harm.

Tillerson said he’s not convinced that what he calls the “deliberate attacks” are over. He defended his September decision to order most U.S. personnel and their relatives to leave Cuba and said he won’t reverse course until Cuba’s government assures they’ll be safe.

“I’d be intentionally putting them back in harm’s way. Why in the world would I do that when I have no means whatsoever to protect them?” Tillerson told the AP on Jan. 5. “I will push back on anybody who wants to force me to do that.”

“I still believe that the Cuban government, someone within the Cuban government can bring this to an end,” Tillerson added. Washington has never claimed Cuba perpetrated the attacks but has insisted the island’s communist-run government must know who did. Cuba adamantly denies both involvement and knowledge of any attacks.

Tensions over the issue are apparent in Congress, with critics of the Cuban government at odds with supporters of closer U.S. ties. And within the Trump administration, the CIA, whose spies were affected while working under diplomatic cover, has chafed at the lack of FBI progress, several officials have told the AP in recent months, while a few lawmakers briefed on the probe have questioned whether the FBI even agrees with the State Department that anyone was attacked.

The State Department has said previously the most recent “medically confirmed” case of an American being affected occurred Aug. 21. Tillerson didn’t cite any more recent incidents, but pointedly stressed he was “not sure they’ve ended.”

The AP has learned at least one additional embassy worker who reported similar symptoms since that date has been sent for medical testing. The symptoms were determined to be unrelated.

Tillerson’s comments and the FBI report illustrate how befuddled the U.S. still seems about the mystery in Havana, more than a year after embassy workers started reporting illnesses including hearing loss, vision problems and memory issues. Symptoms often followed unexplained sounds in diplomats’ homes that led investigators to suspect a futuristic sonic weapon. The U.S. has said 24 government workers were harmed. Canada has reported some of its diplomats were affected, too.

The FBI report, which hasn’t been released publicly, is the clearest sign to date of the U.S. ruling out the sonic weapon theory. The report says the FBI tested the hypothesis that air pressure waves via audible sound, infrasound or ultrasound could be used to clandestinely hurt Americans in Cuba, and found no evidence. Infrasound waves are below the range of human hearing. Ultrasound is above.

In October, the AP published a recording of the high-pitched chirping sound some diplomats heard. Officials cautioned then they weren’t sure whether the sound itself harmed Americans, or was perhaps the byproduct of something else that did. Last month, the AP reported doctors discovered brain abnormalities in patients who were being treated after returning from Cuba. But since the patients hadn’t been tested before working in Cuba, outside experts raised questions.

For Cuba and its U.S. supporters, frustration is growing about Washington’s aggressive response and lack of answers. In addition to pulling out all but “essential personnel,” the Trump administration last year expelled 15 Cuban diplomats and warned Americans to avoid the island. Havana sees those steps as harming U.S.-Cuba relations and damaging its critical tourism industry, all without any proof anyone was attacked.

By law, Tillerson must form an “accountability review board” after any serious injury to diplomats overseas. One highly publicized example was after four Americans were killed in Benghazi, Libya, in 2012.

Tillerson has signed off on the new review board, U.S. officials said. The State Department wouldn’t comment, saying it would announce any decision after Congress is notified.

That could come as early as Tuesday, when the Senate Foreign Relations Committee will hold a hearing about the “attacks on U.S. diplomats in Cuba.” Top officials from the State Department’s medical unit, Diplomatic Security and Western Hemisphere division will testify.

Over the weekend, Sen. Jeff Flake, a longtime proponent of closer U.S. ties to Cuba, said high-ranking Cuban officials told him that the FBI has found no evidence of attacks and that classified U.S. briefings left him with no reason to doubt Cuba’s account.

But Sen. Marco Rubio, a vocal critic of Cuba’s government, declared on Twitter it was a “documented FACT” that U.S. personnel were “victims of some sort of sophisticated attack” and U.S. officials briefed on the matter know that “full well.”

Yet other lawmakers briefed by Tillerson say they were discouraged the Trump administration couldn’t or wouldn’t answer basic questions on the investigation.

The FBI, which leads broader law enforcement cooperation with Cuba, insists it’s doing everything possible in a place where it has little or delayed access to suspected crime scenes.

Tillerson, in the AP interview, said he was satisfied with the U.S. response.