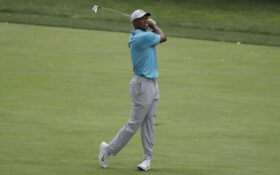 Tiger Woods was back on the PGA Tour for the first time in five months Thursday and saw Muirfield Village like never before.

It was practically empty.

Woods opened with a 10-foot birdie and there was silence. He finished with a 15-foot birdie for a 1-under 71, leaving him five shots behind Tony Finau in the Memorial, and he walked to the side of the green and stood with Rory McIlroy, chatting briefly before they nudged their elbows toward one another without touching.

It was a reasonable return.

“Got off to almost an ideal start and got a feel for the round early,” Woods said. “I just didn’t make anything today. I had looks at birdies, but I really didn’t make much.”

He left that to Finau, who seemed to make everything. Finau finished with seven birdies over his last 10 holes on a Muirfield Village course that was faster and tougher than last week in the Workday Charity Open. That gave him a one-shot lead over Ryan Palmer.

The greens are being replaced after the Memorial, so there’s no concern about them dying out. They were 2 feet faster on the Stimpmeter, the wind was strong and often changed direction without notice. That showed in the scoring. Only seven players broke 70, compared with 35 rounds in the 60s for the first round last week.

This is the first itme in 63 years the PGA Tour has played consecutive weeks on the same course.

It wasn’t a course to overpower, either.

Bryson DeChambeau hit one drive 423 yards with the wind at his back, leaving him 46 yards to the pin on No. 1, a hole where he recalls hitting 5-iron in the past. That was a rare birdie. With wedges in his hand, he still managed only a 73.

Collin Morikawa won at Muirfield Village last week at 19-under 269, beating Justin Thomas in a playoff. Morikawa opened with a 76. Thomas, who didn’t make a bogey until his 55th hole last week, had two bogeys after two holes. He shot 74.

By now, players are used to seeing open spaces with minimal distraction. That wasn’t the case for Woods, who last played Feb. 16 when he finished last in the Genesis Invitational during a cold week at Riviera that caused his back to feel stiff.

The absence of spectators was something new, and it was even more pronounced with Woods playing alongside McIlroy (70) and Brooks Koepka (72). They still had the biggest group, with 36 people around them on the 16th green. That mostly was TV and radio crews, photographers and a few volunteers.

No one to cheer when Woods opened with a birdie and quickly reached 2 under with a wedge that spun back to a foot on the third hole. And there was no one to groan when he wasted a clean card on the back nine with a bunker shot that sailed over the green into the rough.

“I definitely didn’t have any issue with energy and not having the fans’ reactions out there,” Woods said. “I still felt the same eagerness, edginess, nerviness starting out, and it was good. It was a good feel. I haven’t felt this in a while.”

U.S. Open champion Gary Woodland and Brendan Steele each shot 68, with Jon Rahm among those at 69. McIlroy had two splendid short-game shots on the back nine that led to par and birdie, and he was in a group at 70 that included Jordan Spieth and defending champion Patrick Cantlay.

Cantlay hit a pitch-and-run across the fifth green that last week would have settled next to the hole. On Thursday, it kept rolling until it was just off the green.

DeChambeau brought the pop with five more tee shots at 350 yards or longer, two of them over 400 yards. Some of his tee shots wound up in places where players normally hit into the trees or rough and can’t reach the green. But he failed to capitalize with short clubs in his hands.

He hit a wedge into a bunker on the 14th and his chip went over the green, which would not have happened last week. He had to make a 6-footer to save bogey. He also was a victim to the swirling wind at the worse time — a 7-iron from 230 yards over the water to the par-5 fifth. The wind died and he never had a chance, leading to bogey.

“When I was standing over it, it was 20 miles an hour downwind. And when I hit it, it dead stopped. Can’t do anything about it,” DeChambeau said. “That’s golf, man. You’re not going to shoot the lowest number every single day. I felt like I played really bad. My wedging wasn’t great. If I can tidy that up, make some putts, keep driving it the way I’m doing, I’ll have a chance.”