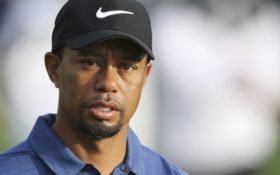 Professional golfer Tiger Woods refused to attack President Donald Trump during an interview on Sunday. Instead, the golfer urged Americans to respect the office of the president.

Following a recent golf tournament, Woods was questioned by a liberal reporter on his thoughts about the president’s policies regarding illegal immigrants.

Shooting down the attack, Woods responded that no matter who is president, it is important to “respect the office” even if you do not agree.

According to USA Today, Woods was asked how he would respond to people who find his friendly relationship with Trump “interesting.”

“At times, especially 2018, I think a lot of people, especially immigrants are threatened by him and his policy — what do you say to people who might find it interesting that you have a friendly relationship with him?” the reporter asked.

Trump has been a personal friend of Woods for a number of years, the two are known to spend time together.

“We’ve played golf together. We’ve had dinner together. I’ve known him pre-presidency and obviously during his presidency,” Woods said.

After answering that question, the reporter then followed up by asking Woods a controversial question on race relations in the country — but was also denied.