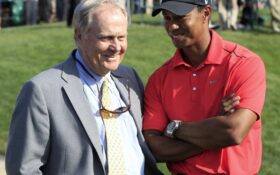 The PGA Tour returned five weeks ago with some of its strongest fields. Now it gets its biggest star.

Tiger Woods announced Thursday on Twitter he will play next week at the Memorial, a tournament he has won a record five times, as he goes after his record 83rd career victory on the PGA Tour.

“I’ve missed going out and competing with the guys and can’t wait to get back out there,” Woods said.

It will end a five-month break from competition for Woods. He last played on Feb. 16 at the Genesis Invitational, where he shot 76-77 at chilly Riviera to finish alone in last place.

Woods said he felt stiffness in the cold weather. He chose not to go to Mexico City for a World Golf Championship, then skipped three straight tournaments in Florida before golf was halted because of the COVID-19 pandemic.

His only competition was an exhibition match on May 24 at his home course in Florida, with Peyton Manning as his partner against Phil Mickelson and Tom Brady.

The tour resumed June 11 at Colonial in Fort Worth, Texas, and most weeks brought some level of speculation that Woods was going to play. He had contemplated coming to Muirfield Village for the Workday Charity Open, a one-time event that replaces the canceled John Deere Classic, but ultimately waited until the second week at Memorial.

That will give him at least one start, and possibly two if he plays a World Golf Championship in Tennessee, before heading into the first major of a reconfigured year.

Woods had said in April he was ready to go for the Masters until it was postponed because of the coronavirus. The Masters is now scheduled for Nov. 12-15, with Woods as the defending champion.

The PGA Championship is Aug. 6-9 at Harding Park in San Francisco, where Woods won a World Golf Championship in 2005. The U.S. Open at Winged Foot is scheduled for Sept. 17-20.

Woods has played only three times this season on the PGA Tour, starting with his record-tying 82nd victory at the Zozo Championship in Japan. He also played at Torrey Pines and Riviera.

Aside from the majors — Woods is three away from matching the standard set by Jack Nicklaus — Woods is missing additional incentive to play, with the Olympics and the Ryder Cup postponed until 2021.