Thrusters fired! The next step in deep space exploration - The Horn News 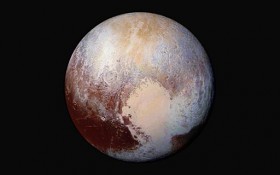 The spacecraft that gave us the first close-up views of Pluto now has a much smaller object in its sights.

NASA’s New Horizons was programmed to fire its thrusters Thursday afternoon, putting it on track to fly past a recently discovered, less than 30-mile-wide object out on the solar system frontier. The close encounter with what’s known as 2014 MU69 would occur in 2019. It orbits nearly 1 billion miles (1.6 billion kilometers) beyond Pluto.

Flight controllers at the Johns Hopkins University Applied Physics Laboratory in Laurel, Maryland, sent commands in advance for the course change. In all, four maneuvers will be needed, carried out over the next two weeks. Thursday afternoon’s was the first; it was expected to be several hours before controllers received confirmation that everything had gone well.

Launched in 2006, New Horizons became Pluto’s first visitor from planet Earth in July. The spacecraft remains in excellent health following a 3 billion-mile (4.8 billion kilometer) journey and still holds a year’s worth of scientific data for transmission back to Earth.

NASA and the New Horizons team chose 2014 MU69 in August as New Horizons’ next potential target, thus the nickname PT-1. Like Pluto, MU69 orbits the sun in the frozen, twilight zone known as the Kuiper Belt.

The extremely remote, faint object was spotted by the Hubble Space Telescope in 2014. It beat out a few other candidates because it will take less fuel to get there.

MU69 is thought to be 10 times larger and 1,000 times more massive than average comets, including the one being orbited right now by Europe’s Rosetta spacecraft. On the other end, MU69 is barely 1 percent the size of Pluto and perhaps one-ten-thousandth the mass of the dwarf planet. So the new target is a good middle ground, according to scientists.

Lead scientist Alan Stern said flight controllers still are working out just how close New Horizons will be able to zoom past MU69. The goal is to get closer than the 7,770 miles (12,500 billion kilometers) that the spacecraft came within Pluto.

The team plans to formally ask NASA next year to fund the mission extension for studying MU69. Scientists promise a better name before showtime on Jan. 1, 2019.

“Although this flyby probably won’t be as dramatic as the exploration of Pluto we just completed,” Stern wrote in a blog earlier this month for Sky & Telescope magazine, “it will be a record-setter for the most distant exploration of an object ever made.”

Johns Hopkins designed the spacecraft, about the size of a baby grand piano, and has been operating it for NASA.