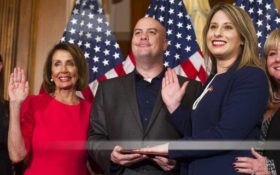 Hill sued Kenneth Heslep, who she said launched a “scorched earth attack” on her after she broke up with him by distributing nude photos to the Daily Mail and RedState, a conservative media site.

“Less than five months after the breakup, naked images of Hill that only Heslep had previously possessed were published globally on the internet, alongside intimate text messages and cruel lies,” the lawsuit said. “Media defendants helped Heslep maximize injury to Hill, widely amplifying and publishing deeply private and degrading confidential information and false statements, all supplied by Heslep.”

Emails from The Associated Press seeking comment from lawyers for Heslep and the parent companies of the media outlets were not immediately returned.

Hill’s lawsuit renews abuse allegations she made in her divorce case against Heslep that led to a temporary restraining order against him earlier this month in Los Angeles Superior Court.

Heslep, 37, was ordered to stay at least 100 yards (91 meters) away from Hill, her mother and her sister, as well as Hill’s dog, goat and horse. She claimed he had killed her pets in the past to terrorize her.

Hill, 33, resigned from Congress last year after nude pictures of her and an aide were leaked to conservative media. Heslep has previously denied those allegations.

Hill had been part of a Democratic wave that knocked seven California Republicans out of office in 2018 when she defeated Republican Steve Knight in 2018 for the 25th Congressional District seat, which covers northern Los Angeles County and part of Ventura County.

Hill said the nude photos were provided by Heslep to sabotage her career after she ended their 15-year relationship that began when she was 16.

Heslep, who lives south of LA in Tustin, was ordered not to stalk, threaten or assault Hill and her relatives or impersonate them on the web. He was ordered to store his guns with a licensed dealer or surrender them to police.

The restraining order is in effect until Dec. 30, when the judge will decide whether to grant Hill’s request to bar Heslep from disseminating “confidential information” about Hill, such as her medical, sexual or financial history, to the media or on social media.

The lawsuit filed in the same courthouse said the Daily Mail published an article three days after the restraining order was granted that included 26 photos taken by Heslep, including one nude of Hill shot without her consent.

“The First Amendment does not provide a carte blanche right to sexually degrade and expose public officials,” the suit said. “This right does not extend to the nonconsensual dissemination of nude images where, as here, the depicted person had a reasonable expectation of privacy.”

The lawsuit says that Heslep and Mail Media, Inc., parent of the Daily Mail, and Salem Media Group, Inc., which owns RedState, conspired to and distributed intimate images of her without her consent. The lawsuit also alleges Heslep intentionally inflicted emotional distress on her and that the companies engaged in unfair business practices by violating privacy laws.

Hill is seeking unspecified monetary damages and wants the images permanently removed from the media outlets’ websites and any physical copies permanently destroyed.