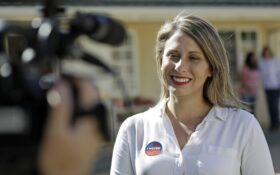 Ex-Democratic congresswoman Katie Hill is being dealt one blow after another.

The infamous former politician — notable for her leaked nude photos amid the 2019 “throuple” (threeway couple) scandal — had an ongoing lawsuit against The Daily Mail for publishing the lewd photos online.

Hill had been hoping to successfully sue The Daily Mail, conservative blog RedState, and her ex-husband Kenny Heslep.

But according to Los Angeles Magazine, Judge Yolanda Orozco shattered those dreams.

Orozco instead ruled that Hill must pay Daily Mail’s attorney fees — more than $100,000!

But per Orozco’s ruling, she said that the infamous moment was a matter of public concern, given Hill’s position in office.

Hill was a public figure at the time.

Her lawyer argued that the judge’s $100,000 ruling could bankrupt Hill.

Carrie A. Goldberg chimed in, blasting the ruling as bogus.

“The Daily Mail relished in repeatedly publishing the SAME nude images,” she wrote. “And that’s newsworthy?”

The Daily Mail relished in repeatedly publishing the SAME nude images. And that's newsworthy? DM relished that they were from Katie's ex and one was taken without knowledge or permission.
The extravagance of Anti-SLAPP overbreadth is rivaled only by 230. https://t.co/AbPI3Uf5eD

The disgraced Democrat took to Twitter, blasting the justice system.

“A judge just ordered me to PAY the Daily Mail more than $100k for the privilege of them publishing nude photos of me obtained from an abuser,” she wrote. “The justice system is broken for victims.”

A judge just ordered me to PAY the Daily Mail more than $100k for the privilege of them publishing nude photos of me obtained from an abuser.

The justice system is broken for victims.

Our fight continues – please chip in if you can: https://t.co/qKaSPpC2nq#BoycottDailyMail

The major loss comes on the heels of other recent setbacks for Hill as well.

She also sued fellow conservative blog RedState — but lost badly in that pursuit as well. The same Los Angeles Superior Court Judge ordered that Hill pay more than $80,000 in legal fees, and $30,000 to a radio host for his legal fees as well.

“… Please chip in if you can,” she wrote to her followers.