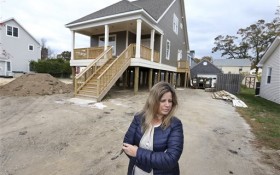 On the three year anniversary, several thousand still cannot get back home due to bureaucratic red tape with government aid programs, disputes with contractors and insurance companies, and just not having enough money to complete the job. A recurring theme among these people is their sense of having been forgotten three years after the storm. Here are three of their stories:

Home is a trailer

“This is paradise,” Bob Collis said, sitting under the awning of a portable trailer stuffed to the brim with many of his family’s possessions; his clothes are all in plastic storage bins wedged underneath the trailer because they won’t fit inside.

Collis and his wife, Katherine, loved the little ranch house they had in Toms River, in a tight-knit waterfront community near Barnegat Bay called Snug Harbor. But Sandy wrecked the home they lived in for 45 years. Now the 72-year-old couple lives in a trailer at a mobile home park in Berkeley Township, a few miles south, where Katherine is recovering from a series of strokes, one of which predated the storm and two more that came soon after it.

Their biggest problems, they said, have been an unresponsive bureaucracy, a period of agonizing over whether to elevate their damaged house or knock it down and start over, and a severe shortage of funds that has left them still $150,000 shy of what they need to get back into a house for their remaining years together.

The couple got a $150,000 grant from New Jersey’s main storm rebuilding program but had to sign a contract to elevate their house. They spent $10,000 on preliminary work toward raising the house before deciding to raze it. They say their elevation contractor delayed too long to save the house; the contractor says it did more than $10,000 worth of work but never got the go-ahead from Collis to proceed with more work.

Collis never imagined he’d still be living in temporary shelter three years later. He said they got the runaround from state recovery agencies, a common complaint among Sandy victims.

Lisa Ryan, a spokeswoman for the state Department of Community Affairs, said the agency speaks with Sandy victims each day and is mindful of their struggles.

“We want to assure families affected by the storm that our singular focus at DCA is to get them back into their homes, and that we will work in good faith with any homeowner who is committed to the rebuilding of their storm-damaged home,” she said. “We are also continually assessing the operational effectiveness of our recovery programs and improving our performance. ”

Katherine Collis, when asked her feelings about their situation, can only cry. That’s something Bob often feels like doing, too.

Michelle Petrow, a single mother of three, needs a kidney transplant and is still rebuilding after years of fighting with insurers, contractors and state aid programs.

Her home in Manasquan was damaged by Sandy and had to be torn down. The new one, some 15 feet higher off the ground than the old one, is still under construction, and she’s living in a nearby rental.

“People think Sandy was three years ago and that it’s over,” she said. “They don’t know how much we’re still suffering. Home is the center of your universe. It’s where your life happens, what everything revolves around. Without that home, it’s not the same. I don’t even know where my kids’ stuff is, we have stuff in storage in so many places.

“So much of life has happened in the last three years; there’s no place to have Christmas or a party,” she said. “It’s a terrible feeling. It makes me crazy not being able to finish this.”

Petrow, an interior designer, got a $150,000 rebuilding grant from the state and a $130,000 flood insurance payout from a policy she expected to cover $250,000 worth of losses. That has left her thousands of dollars short on the cost of rebuilding.

She has asked her mortgage lender to modify her loan, which the bank says it is considering, noting she was behind on payments before the storm hit. The house had been in foreclosure last year, but that was halted when she filed for bankruptcy protection.

“We’re not trying to cheat anybody,” Petrow said. ‘I’m putting money into the house, and I still haven’t signed on the dotted line that I’ll actually be getting the house. Somebody, somewhere, please: Give us a break.”

Not enough bleach… or contractors

Chuck Griffin tried. In the days after Sandy’s waters receded from his house in Little Egg Harbor, he ripped out soggy wall board, and sprayed bleach where mold was starting to grow. He and his wife stayed there for two years, in an unfinished house, as they awaited permission — and money — to elevate it by 10 feet. He signed a contract in January, with the work due to begin in June.

Griffin handed his contractor $50,000, representing one-third of the work’s cost, but said he still has not gotten a commitment for when the work will begin. He and his wife have been in a rental since May, with no end in sight. They got a $150,000 state rebuilding grant, but their repair job is in limbo.

“Not being in your own home is tough,” he said. “I have all these cardboard boxes: one is full of underwear, the other is full of shirts. I can’t wait to get back home. People think Sandy is all done; it’s not. People like me are still not home. I want people to know that we are still without a home, but they’re not talking about that anymore.”