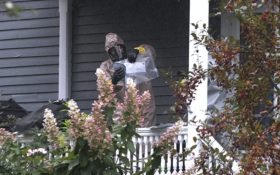 Thomas Daffron, who opened the letter Monday, said the writer claimed the letter was tainted with ricin residue.

Collins, who was in Washington at the time, told WABI-TV that she learned of the letter in photos sent from her husband. Daffron and the couple’s Labrador retriever, Pepper, were both quarantined for a time.

They were allowed to stay in the home, joined by Collins, after preliminary tests showed there was no public threat.

Collins and her staff have been subjected to threats over her decision to back Kavanaugh for the Supreme Court.

“I will not live in fear. I will not be intimidated. I’m going to continue to do what I think is right for the people of the state whom I work very hard for, and for our nation,” she said.

Daffron said that the letter was addressed to him but that it contained vitriol directed at his wife. He put the letter in a plastic envelope and dialed 911 after he saw the word “ricin,” he said.

An investigation continues. Bangor police, U.S. Capitol police and the FBI declined to provide any updates, saying they can’t comment on active investigations.