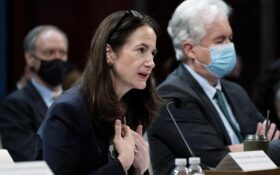 Thousands of intelligence officers could soon face dismissal for failing to comply with the U.S. government’s vaccine mandate, leading some Republican lawmakers to raise concerns about removing employees from agencies critical to national security.

Several intelligence agencies had at least 20% of their workforce unvaccinated as of late October, said U.S. Rep. Chris Stewart, a Utah Republican who is a member of the House Intelligence Committee.

Some agencies in the 18-member intelligence community had as much as 40% of their workforce unvaccinated, Stewart said, citing information the administration has provided to the committee but not released publicly. He declined to identify the agencies because full information on vaccination rates was classified.

While many people will likely still get vaccinated before the administration’s Nov. 22 deadline for civilian workers, resistance to the mandate could leave major agencies responsible for national security without some personnel.

Intelligence officers are particularly hard to replace due to the highly specialized work they do and the difficulties of completing security clearance checks.

The Office of the Director of National Intelligence declined several requests to provide figures for the intelligence community. The office also would not say what contingency plans are in place in case officers are taken off work due to not complying with the mandate.

Director of National Intelligence Avril Haines declined at a hearing last week to disclose what percentage of the workforce had been vaccinated, but said “we are not anticipating that it is going to be an issue for mission.”

There are an estimated 100,000 employees in the intelligence community.