THIS superstar conservative means trouble for liberals - The Horn News 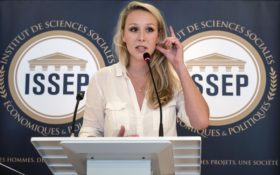 She vowed to stay out of politics and even dropped the French far right’s signature name — Le Pen — from her moniker. But Marion Marechal, a former star lawmaker who’s still only in her 20s, is now tip-toeing back into the political arena, and is already causing trouble.

Widely seen as a potential party leader, the 29-year-old’s discreet meetings in recent days to build bridges with enemy conservatives, crippled by their crushing defeat in European Parliament elections, are further unsettling the mainstream right.

The forays into forbidden territory by the woman once voted the most popular in the far-right National Rally party (formerly the National Front) led by her aunt, Marine Le Pen, have also raised questions about Marechal’s political intentions — and whether a new war within the Le Pen clan is afoot.

Marechal is the darling of her controversial grandfather, Jean-Marie Le Pen, a National Front co-founder expelled by daughter Marine for repeating anti-Semitic remarks that got him convicted. Marechal is more conservative than her aunt. Addressing a major forum for American conservatives last year, she decried the European Union and said France is becoming “the little niece of Islam.”

To Jean-Marie’s disappointment, Marion dropped out of politics two years ago, refusing to seek a new mandate as a National Rally lawmaker to found a private school in Lyon seen as a training ground for far-right leaders.

She denies speculation she is making an end-run around Aunt Marine for a comeback. Nevertheless, the noise created after at least two below-the-radar meetings became known underscores Marechal’s potentially pivotal role in the power politics of the French right.

A dinner in late June between Marechal and more than a dozen officials and lawmakers of The Republicans, or LR, caused a firestorm within the main conservative party. The conservative mainstream has long been extremely wary of liaisons with France’s far right, but the meeting suggested that some conservatives may believe the only way to survive is by joining forces with the likes of Marechal.

Senate leader Gerard Larcher, of the LR, said those who met at a Paris restaurant with Marechal have placed themselves “outside” the party.

“I have always said there was a firewall between us and the National Rally,” party, he said on LCI TV. “Whether you like it or not, this (dinner) was a breach.” Those who attended risk exclusion from the party, Larcher said, making clear that for him they already had “placed themselves outside the values of our political formation.”

Meanwhile, France’s powerful business lobby Medef invited Marechal to speak about the rise of populism at its annual summer gathering — but then canceled the whole panel after the idea left many aghast.

The National Rally came to the forefront of French politics with its win in the European Parliament elections in May. The party bettered President Emmanuel Macron’s centrists and hopes to maintain momentum ahead of municipal elections next year.

In a TV interview in early June, she said she wanted to build a “grand alliance of the right” — though she insisted her intentions were devoid of personal ambition.

She had some stinging words for the National Rally, saying it is “indispensable to political life, but unfortunately, it isn’t sufficient.” Defending the nation, and countering Macron’s progressives, needs “other voices from other movements, currents” to create alliances.

Marechal has been regarded as a potential presidential candidate in the 2022 election, or later, raising occasional tensions with her aunt, who was roundly defeated in 2017 by Macron after making it to the runoff. Former White House strategist Steve Bannon praised her as a “rising star” — on a stage he shared with Marine Le Pen at an important National Rally congress.

If Marine Le Pen is wary that her niece is setting the stage for a return to politics, neither she nor her camp is saying so.

Le Pen was politely dismissive of her niece’s initiatives.

“That Marion wants to build bridges with people of the traditional right closer to us than to Emmanuel Macron, so much the better,” she said in an interview with BFMTV this month after her niece’s remarks. As for Marechal’s “regret” about short-comings of the National Rally, Le Pen took a diplomatic dig.

“One should not be pessimistic when one is young,” she said.