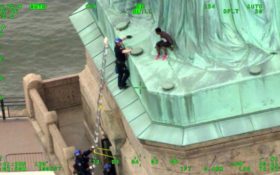 A woman who climbed the base of the Statue of Liberty on July 4 to protest the separation of families at the Mexican border was convicted Monday of misdemeanor charges by a judge who said a person’s viewpoint can’t be a factor in whether laws are enforced.

The verdict by U.S. Magistrate Judge Gabriel W. Gorenstein came two hours after Therese Okoumou got choked up as she testified, saying images from the U.S.-Mexican border of children being torn from their parents gave her nightmares.

She faces up to 18 months in prison at a March 5 sentencing on charges of trespassing, interference with an agency’s function and disorderly conduct.

Ron Kuby, one of Okoumou’s lawyers, told the judge that his client wanted a trial even though it was clear the “likelihood of her conviction today was close to 100 percent.”

In a courtroom packed with emotional Okoumou supporters, Gorenstein explained that his decision needed to be consistent whether it was Okoumou who climbed the statue or somebody with the exact opposite opinions.

He noted that Okoumou repeatedly ignored orders to descend from a perch at the feet of the statue that was high enough that a prosecutor said it could have seriously injured or killed her or tourists below. New York Police Department rescuers were forced to climb a rickety ladder and gird themselves like mountain climbers to safely bring her down.

The nearly four-hour demonstration forced an evacuation of 4,330 people from the statue grounds on one of its busiest days of the year.

Okoumou had testified that she couldn’t live with the sight of “children in cages” and thought climbing the statue was the only way to bring attention to the issue.

“I have had nightmares. I just couldn’t live with it,” she said.

Outside court afterward, she stood alongside Kuby, defense attorney Rhidaya Trivedi and California attorney Michael Avenatti, who served as an adviser in the case, as supporters held signs behind her.

“We stand on the right side of history,” Okoumou said. “I am not a bit discouraged today.”

She said she didn’t regret her Statue of Liberty protest.

“The act of climbing the base of the Statue of Liberty went well beyond peaceable protest, a right we certainly respect. It was a crime that put people at grave risk,” he said, citing the work by NYPD and U.S. Park Police officers who rescued her.

Gorenstein allowed Okoumou to remain free without addition bail conditions requested by Assistant U.S. Attorney Brett Kalikow, who said Okoumou had twice tried to climb the Eiffel Tower in Paris and was arrested at an August 2017 Department of Labor protest.