This Obama video is 'painful' to watch - The Horn News 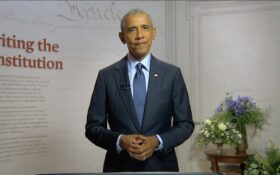 Former President Barack Obama has been stumping for downballot Democrats by embarking on a warp-speed our of swing states like Georgia, Michigan and Wisconsin.

Apparently, Obama also been campaigning for Democrats on TikTok, a social medium for sharing dance videos.

In a video skit, Obama walked into his office to find TikTok personality Vitus “V.” Spehar under his desk.

“V., what are you doing under my desk?” Obama said.

“You can stay for now, but when it comes time for voting you’re going to have to get up, because you got climate change legislation on the ballot. You got gun safety. And, when we can elect more pro-choice members of Congress, we can reinstitute Roe v. Wade as the law of the land. So, you can’t stay here, you’re going to have to take a little bit of time to vote.”

Spehar responded, “Is now a bad time to say that I voted for McCain in 2008?”

Obama demurred. “As long as you voted.”

The Twitter account @LibsOfTikTok boosted the video to its conservative audience… and it got some strong reactions.

Obama faced criticism for losing touch. One viewer mocked, “How do you do fellow young people?”

Obama turned 60 last year. Spehar is rumored to be about 40, despite TikTok’s reputation for popularity among young people.

Besides Obama, other Democrats have also been embarassing themselves on TikTok.

Texas Democrat Beto O’Rouke — a former U.S. representative and a current candidate for governor — went viral on for an awkwardly suggestive video about abortion.

O’Rourke appeared in a video with “a Texas woman who just wants rights” and described himself as “a pro-choice governor who is ready to fight for her.”

All the while, they were dancing to slow music.