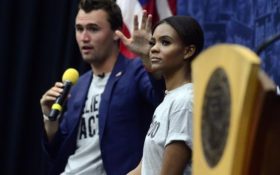 Political commentator Candace Owens hit the stage at CPAC with some words that will terrify the liberal left.

Owens said the turning tide to conservative values is real — and it’s unstoppable.

Owens, the founder of the BLEXIT (Black Exit) movement, said she was able to influence thousands of young minds with one word: truth.

There are four fundamental truths she told the crowd that were driving her movement.

Truth #1 – America is not a racist country.

Truth #4 – Minorities at staggering numbers are beneath the poverty line

But Democrats care more about illegal immigrants than they do struggling Americans.

“I say no thank you, build the wall,” said Owens, defiantly to the crowd of supporters.

Owens is a rising star in the conservative movement, and her appearance at CPAC certified that status.

In her powerful speech, she openly wondered how she could grow up listening to rappers who all wanted to be like President Donald Trump… only to hear some of those same people label him a racist once he was in politics.

“Obama once said the American dream was to be like Trump,” said Owens. Now, these same people say they hate him.

The YouTube sensation turned conservative activist made sure not to leave out the left’s hypocrisy, either.

She went on to accuse the left of infecting and infesting young minds, claiming that liberals Democrats don’t want debate. In fact, they never wanted debate in the first place.

Owens also called former Secretary of State Hillary Clinton out for her disastrous 2016 campaign and the way she grossly undervalued the African-American vote.

“She offered us hot sauce and Jay-Z and Beyonce concert tickets,” Owens said. “How on earth is it that the party that created slavery and Jim Crow laws has the black vote? Democrats never want to fix our issues. They want black America to stay broken. They want to give handouts, not hand-ups.”

She didn’t finish there — Owens slammed the entertainment industry for their unfair bias.

“There isn’t a culture more hostile to conservatives than entertainment.”

Owens knows what it’s like to rise to success from nothing and she left the CPAC stage with this message:

“What makes America great is how quickly your life can transform when you stop viewing yourself as a victim.”