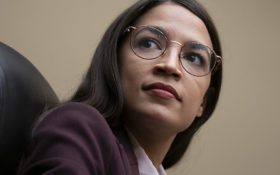 The Met Gala is a who’s-who of the world’s most rich and powerful who gather together once a year to rub elbows with the other global elites and congratulate one another.

So, of course, socialist Rep. Alexandria Ocasio-Cortez (D-N.Y.) had to make an appearance at the $30-35,000-per-ticket event. An event where a single table costs more than a quarter-million dollars.

And the pictures of her in her expensive, custom-made designer dress went viral for all the wrong reasons.

The influential young lawmaker went to the opulent champagne-and-caviar extravaganza in a custom-made dress with a socialist message on the back: “Tax the Rich.”

Pictures and videos of her on the red carpet will have you rolling your eyes.

Of course, Ocasio-Cortez wasn’t the only one with a performative message on their hand-made gowns and outfits.

With their servants masked and the general public kept separated, the rich and powerful made sure to stop and pose for fashion pictures at the expensive events and showcase their wokeness.

Think we can all agree “activism” is kinda over and generally embarrassing tbh pic.twitter.com/7XV4NN7ho5

During a deadly coronavirus resurgance, the museum was still filled to the brim with TV stars, musicians, and luminaries of business and politics.

An evening that had been casually billed as a “mini” gala — with the full-size gala to return in May — hardly felt “mini” at all, with 400 guests instead of the usual 550 or so.

The cocktail reception was packed as always, the mingling just as energetic — often without a mask in sight (except on the servants, of course).

Fashion’s biggest party for the rich and powerful would not be stopped.

Let the rest of the country eat cake.